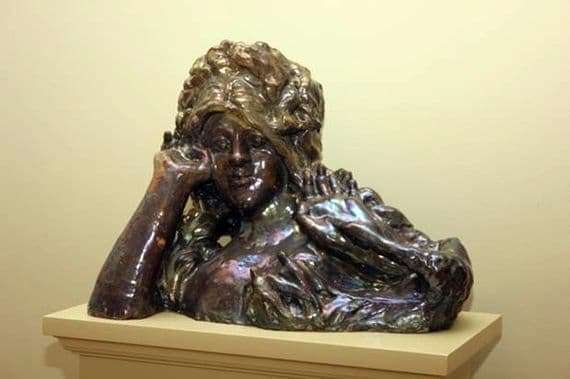 The first attempts of Vrubel to create a work in the field of majolica began in the early 1890s. They were connected with the local ceramic workshop that belonged to the philanthropist S. I. Mamontov.

The first attempts of the artist were so successful that he soon managed to lead the workshop. The second half of the 1890s was the most significant period in the work of the artist. The Creator begins to work closely with the well-known technologist Vaulin, and he discovers the technology of making restorative glazes.

In parallel with the ceramics, the artist begins to get involved in theatrical works and become acquainted with the famous opera singer – N. I. Zabeloy. After some time, she becomes his wife. The artist begins to communicate more closely with the composer Rimsky-Korsakov and works on his operatic works. All this leads the artist to the work of compositions in the Russian folk genre – Lel, spring-red, Snow Maiden, Sadko and others.

The artist begins work on a series of small majolica sculptures, under the images of Russian fairy-tale characters from the works of Rimsky-Korsakov. Thanks to the descended inspiration, the artist already in 1900 received a gold award at the Paris World Exhibition, for copies from the Abramtsevo workshop.

Very much the judges liked the tender and tremulous spring. In the face of a fairy-tale character, the face of his beloved wife, Hope, is guessed. Spring, as in Russian fairy tales, is depicted as a young, attractive and cheerful woman.

Thanks to the tremendous possibilities of majolica, the artist depicted smooth outlines and form, as well as a game of color highlights. All this helped to create a truly fabulous look (and not even one) of the fabulous beauty of spring.