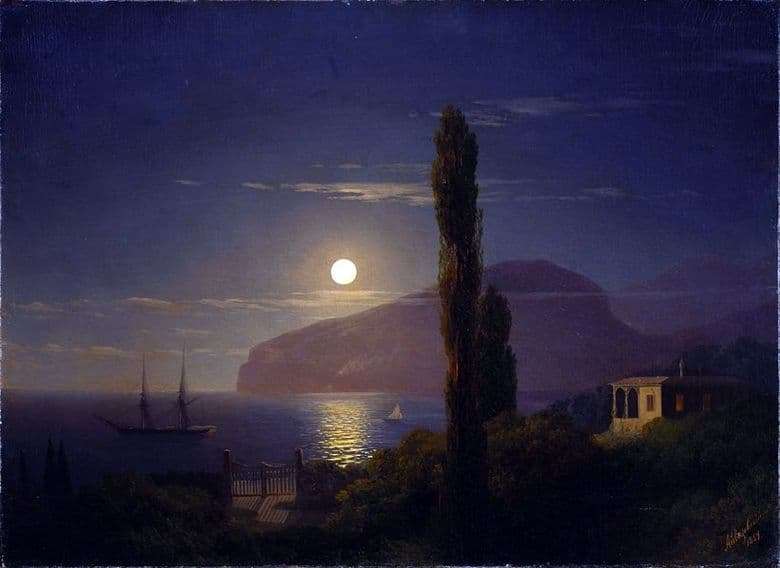 Many artists prefer to work in kind, without sketching in advance. Ivan Konstantinovich Aivazovsky was different from everyone – he preferred to write from memory. The basis of it served as his own fluent full-scale sketches.

“Moonlight Night in Crimea” was written by the artist in winter. In the picture we see the pictured summer calm evening. Date of birth of the painting – February 1853. Painted on canvas with oil. The size of the painting is 40×56 centimeters.

This was the early period of the creative path of the artist Aivazovsky. Thanks to the use of muted green, bluish colors, he managed to convey how beautiful the summer night, the silence, tranquility and romance of the southern coast of Crimea are.

In the picture we see small clouds floating above the bay in Gurzuf, the moon quietly dozing over Ayu-Dag, illuminating Dzhenevez-Kaya and the ruins of the fortress destroyed in antiquity, which are located on it. The light from the moon illuminates the sea surface, towering rocks and ships that stand in the bay.

The middle of the XIX century for the artist has a particularly successful period in his work. Despite the fact that from 1853 to 1856. there was a war in Crimea, Aivazovsky never ceased to create. We see in the picture a reflection of his calm, romantic landscape.

Aivazovsky outstanding marine painter preferred to paint seascapes. Among his works there are several with a similar name “Moonlight Night”.

Beginning in 1994, paintings by the artist were sold at art auctions, worth more than a few million US dollars.