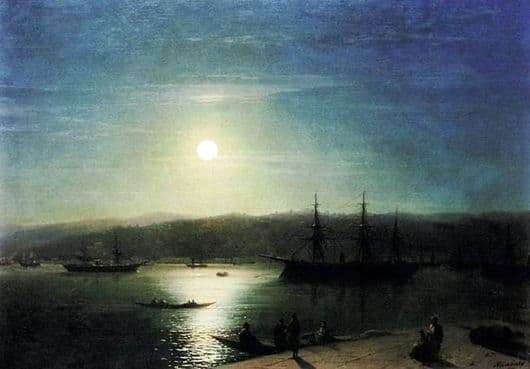 This is one of the paintings of Aivazovsky on the marine theme. The artist trembled with respect to the seascapes, moorings and all manifestations of this element. He spent many years in different countries, where he studied the art of painting and nature.

Aivazovsky had an exceptional visual memory, all the details in the pictures are written with incredible accuracy. His paintings have been admired for more than one century. They simultaneously calm and excite the soul. No one earlier could depict the water element, light and air as authentically as Aivazovsky did.

The painting depicts the Bosphorus in the full moon, painted in oil on canvas. This is one of the series of paintings of marine painting by Aivazovsky. The serenity and calmness of the water surface calms. Calm… The picture was written very realistic. Looking at it, you can spend hours dreaming and walking along the pier, admiring the moonlit path. The painting shows moored ships, they set sail to enjoy the rest and gain strength for further journeys.

Small fishing boats are floating peacefully among the sleeping brigantines. In the background you can see the ship sailing to the pier with raised sails. Full moon gives us the opportunity to see the mountains surrounding the strait. On this night, the moon alone reigns in the sky and it does not need to make its way through the clouds. Tired fishermen sit on the shore and talk.

The ability of the artist to depict moonlight, night sky, water surface and glare on it is amazing. He creates these images in many of his paintings. The sea for Aivazovsky had a special attracting power. He said that it was his life and if he lived for 300 years, he would always find something new in him.

The artist had the ability to transfer to the canvas the movement and breath of the seascape. His love Aivazovsky remained faithful all his life.

The picture is in storage in the State Tretyakov Gallery. Moscow.