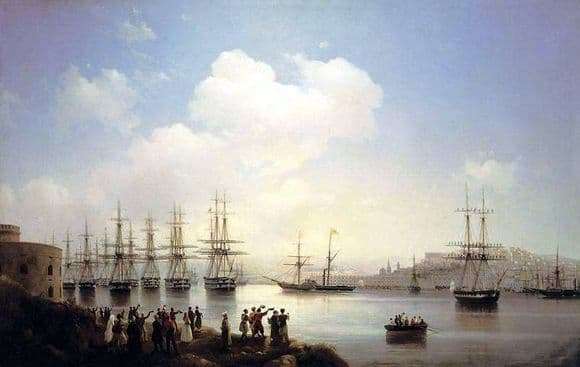 Today, the painting canvas by Ivan Konstantinovich Aivazovsky is kept in the State Russian Museum of St. Petersburg. This work of the artist was commissioned by the emperor in 1846, the plot of the painting is the appearance of Emperor Nicholas I in the port of Sevastopol, inspecting the entire city and checking the navy on the Black Sea.

High sky, morning cumulus clouds, slowly growing on the horizon, divide the sky, a peaceful ridge approaching the city, driven by a fair wind with a Russian squadron. The parade of ships with high masts is ready for the long-awaited meeting. The townspeople gathered near the coast, joyfully waving their panama keys, the noise of their joyful voices is heard on the whole sea pier. The yacht with the imperial flag raised high up in the center of the canvas, and the real pride of the Black Sea fleet, the magnificent brig Mercury turned to the right.

Morning sun lazily climbing the horizon, illuminating everything around, smooth as glass, the surface of the water also froze in anticipation of the arrival of Emperor Nicholas I. .

The impregnable fort, which is located on the left, looks powerful, inspires a sense of security and comprehensive security of the Mikhailovsky Battery.

On the opposite shore is located Nicholas Fort in three tiers. The Peter and Paul Church, whose spire is visible in the rays of the morning sun, rises on the surface of a steep urban landscape.

The solemnity of everything that happens inspires genuine pride in the Russian fleet after a century, and the unshakable calm created by the artist would never seem to be broken. However, as history has shown, in the days of the Crimean War, the ships standing majestically in the bay of Sevastopol will lay low in the name of protecting this beautiful city, fulfilling their heroic duty.