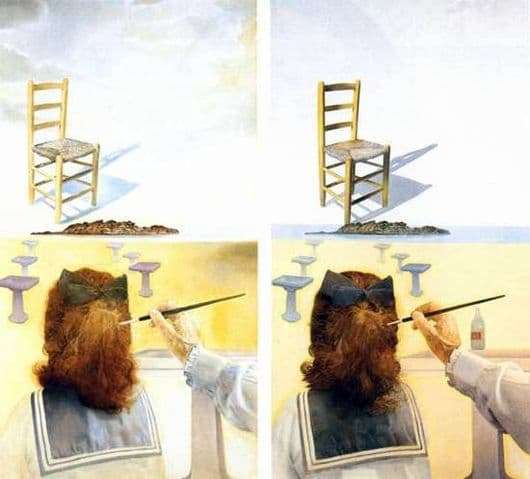 Salvador Dali has always been interested in photography, animation and cinema. He himself is known not only as an artist, but also as a screenwriter, production designer and author of a well-known advertising logo. In his own paintings, he repeatedly applied any achievements in the field of each field of visual art and sometimes in a completely new way. This is interesting and his creation, which has a very simple name – “Chair”.

This picture was painted in 1975. At first, it draws attention to the fact that it consists of two parts that are very similar in appearance. But the viewer continues to look further and sees many differences.

Left half. It depicts a girl, turned to the artist, whose hand with a brush we see, back. This child is dressed in a classic sailor suit. She has a simple blue bow on her head, her hair is curled. She is sitting on the beach and, apparently, is looking at a huge chair, hovering in the sky, slightly covered with clouds. And maybe on the tables or an island – the very dark part of the land in the sea.

Right half, lighter. Almost the same, but the girl turned her head slightly to the right, and the hand of the artist, who wore a clean shirt for the first half, does not block the bottle with the red label on the nearest table. And the sky became clear – not a cloud or clouds could be seen on it.

What is the catch of this rather simple picture? Both parts of the “Chair” make up the so-called stereo pair. That is, if the viewer begins to look at this work by Dali stereoscope (created by Charles Winston, 1837), he, in theory, will see only one three-dimensional image – “Chair” in three dimensions, “Chair” in 3D. So the result of an amusing experiment of an artist can be appreciated only by a modern person, realizing the fact that it is possible to make an elegant joke without even knowing about it.