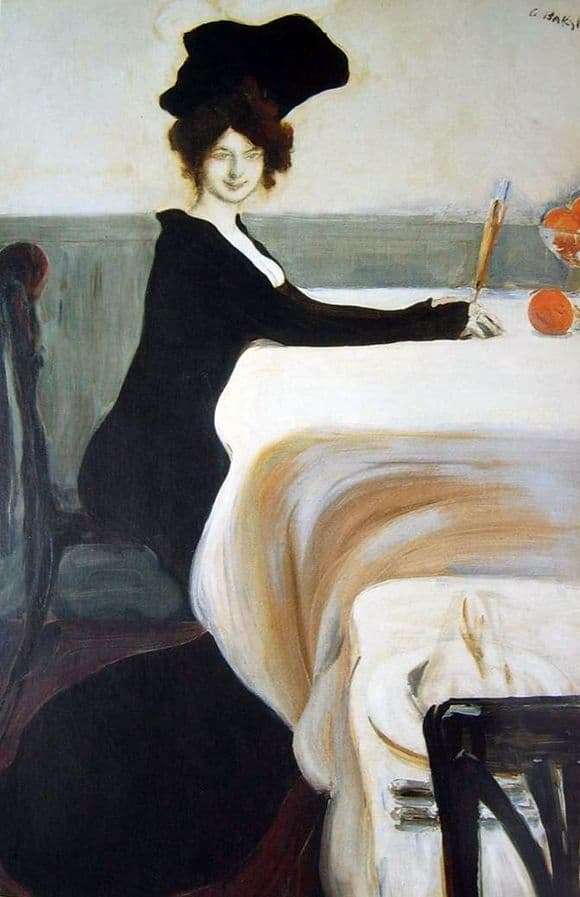 Once two artists, united by friendly feelings and proximity to the group “World of Art”, Leon Bakst and Valentin Serov, enjoying the view of the streets of night Paris, decided to go to a cafe. In the farthest corner sat a woman, whose portrait Bakst did not fail to draw on a napkin. She was Anna Kid, wife of the founder of the “World of Art” Alexander Benois. Well, the world is small… Especially this concerns the Paris of those years, which attracts the creative elite from other countries, including Russia, with a magnet.

The picture, transferred from the napkin to the canvas, did not pass unnoticed among critics, alas, not always complacently disposed. “The unbearable thing!”, – burst out at the sight of the canvas from the famous art connoisseur Vladimir Stasov. Although it would seem that there is nothing shocking in the picture: there is more than the traditional theme of a bored stranger,

an impressionistic style of writing. If there were several merry men sitting next to a woman, the canvas could be like the works of Toulouse-Lautrec and other impressionists. However, Bakst not only captures what he saw, but also seeks to transform it.

The main motive of the canvas is the dynamics of the outlines of the environment and the most female figure, achieved by successfully matching the rhythm of the white and blue planes, the edges of the tablecloth and the wave-like dress of the lady in the bottom of the picture. Then this movement stops, as if having encountered an invisible barrier. The hands of a stranger, her face and a hat, the disproportion of which makes one recall the flower bud, are already on the same line.

The artist also uses the color game, built on a roll of the hair of a lady and oranges, which was done, as it were, in peak Serov’s realistic approach in his “Girl with Peaches”. Bakst leaves the woman’s face as if unfinished, which allowed him to emphasize the mystery, intangibility of this lady, adjacent to the sensual beauty that can reach the depravity.