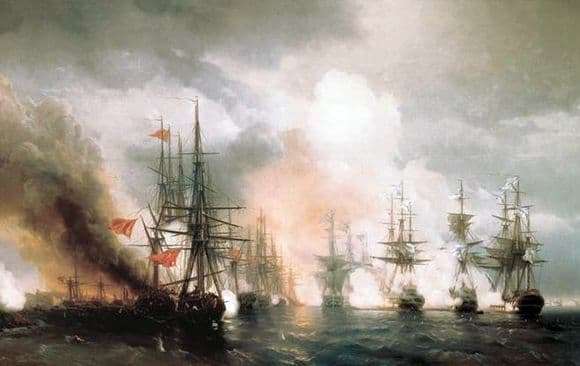 The famous Russian marine painter, IK Aivazovsky, wrote all the states of the sea: from serene calm to the ninth wave. Fighting excitement on the water also did not escape the attention of a great artist. He dedicated a number of canvases to the description of battles during the Crimean War.

At the end of 1853, the artist made two canvases about the Sinop fight, which happened the same year, in November. Russia was declared a war by the Turkish state. Russian warships headed for the Black Sea to enemy lands and reconnoitred about finding the Turkish fleet at Sinop Bay. The Black Sea Fleet approached the closest distance and began the battle. The result of the four-hour battle was the complete defeat of the Turks. Under the command of Nakhimov, all Turkish ships except the only one were destroyed. The Russian side remained without loss of the fleet. The outcome of the battle raised the morale of the victors, giving confidence in future accomplishments.

Aivazovsky on the first canvas captured the very beginning of the battle: morning, slightly billowing waves, the sky is gray with clouds, white clouds of cannon smoke stand out on it. Sailing ships with red flags and white and blue on the other side are safe and sound. The second picture shows us the results of the sea clash: the ships of Nakhimov stand as an indestructible rock, and all that remains of the enemies are the dying ships, throwing fiery reflections into the sea mirror. The whole space is filled with a fiery color against the black of the night; chips fly apart, and the water is even calmer.

The painter began to work on the “Sinop battle” only after long conversations with its participants: all the details about the weather and actions became known. Therefore, the result of labor has admired Admiral Nakhimov, and the rest of the sailors still surprise people and make them feel the fighting atmosphere and triumphant spirit.

The painting is now in St. Petersburg in the gallery of the Naval Museum.