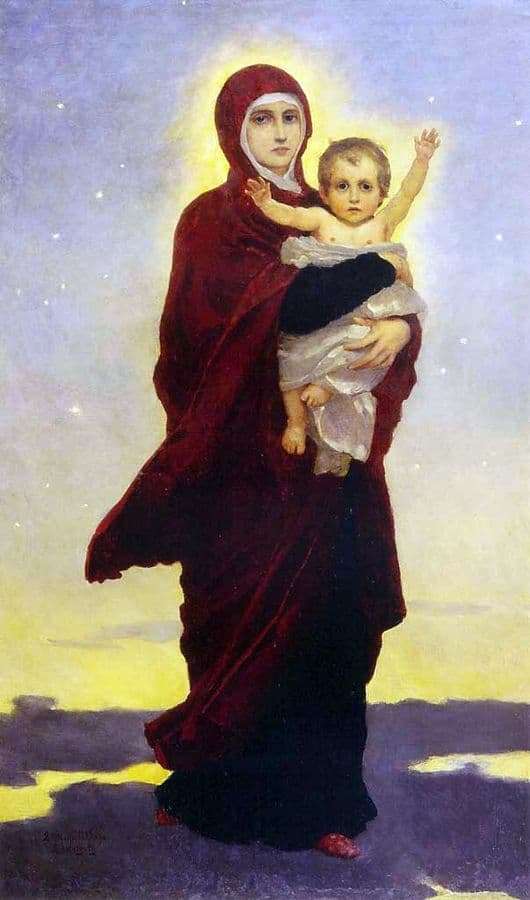 A special place in his work is the image of the Virgin. We should also dwell on the painting “The Virgin and Child”, written by the artist in 1889. It was this work by Vasnetsov that served as a sketch for the painting of the Vladimir Cathedral.

Almost the entire area of the picture is occupied by the figure of the Mother of God going straight to the viewer, carrying in her arms the Infant Christ. The baby wrapped in a veil is depicted with arms raised up and reaching for the audience. He kind of blesses those who come before him. As it should be in any iconography, the heads of both figures are shrouded in a golden glow, personifying their divine essence. The background on which figures are depicted is originally made. It is impossible to say with a certain certainty whether the Mother of God steps on the earth or moves in the heavens.

The faces of the Mother of God and the Baby are unusually alive. These are not canonical faces viewed from standard icons. On Vasnetsov’s canvas, viewers see ordinary people. The figure of the Baby and his position are also quite natural, and do not cause a sense of fantasy of what is happening. Looking at the canvas, the viewer has an image of an ordinary woman carrying a child in her arms. Her eyes are sad, but they glow with an incredible love for her son and for the whole world.

The idea to present the Mother of God just like that, was inspired by the artist in the manner of his wife with her son in her arms. In the future, this image of the Virgin was actively used in Russian iconography and was named the Vasnetsovskaya Mother of God.