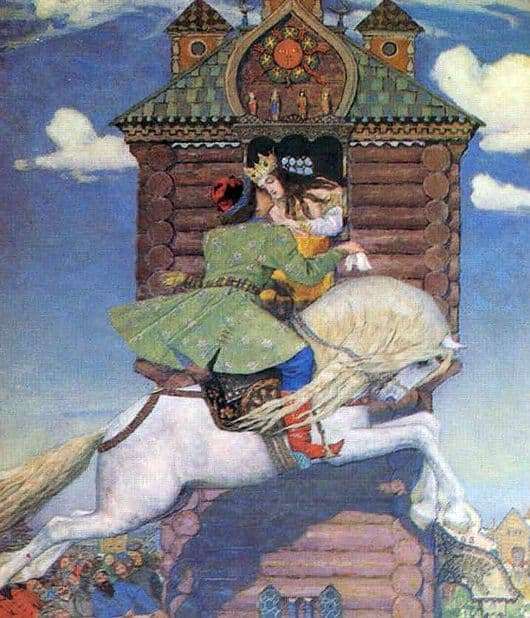 Vasnetsov’s canvas tells us all a long-known fairy tale about brothers, among whom there is a younger one and he is a fool. But, as you know, fools are always lucky, so he gets the most good horse, more precisely a cross between a horse, the most beautiful girl who is surely an expert on the all-rounder.

The painting depicts the tower, and the window of this tower is the maiden-beauty. At an unknown height, a beautiful young man, and in the story of a fairy tale – a fool, in a nod-burqa flies near this terema window, while passionately kissing his beloved.

Somewhere below you can see the heads of people, they rejoice and rejoice, welcoming the young and the lovers. This picture is an episode from a fairy tale, but in it the artist left all his vision of good, honesty, courage and courage. After all, having decided on such an act, the young man proved that he could be a claimant to the hand of the king’s daughter. Both of them are festively dressed, many details that emphasize the importance of the picture and what happens to the characters.

It is worth paying attention to the horse. This is a beautiful stallion, smart and strong, not to mention loyalty and nobility. His strong body stretched out in a leap, as if it had purposely stopped, so that the young man had time to kiss the beautiful princess.

Vasnetsov hoped that this picture would show people that there were no hopeless situations and it was worth fighting for happiness, even going beyond what was reasonable. He called people to faith and justice, endowing his heroes with these qualities.