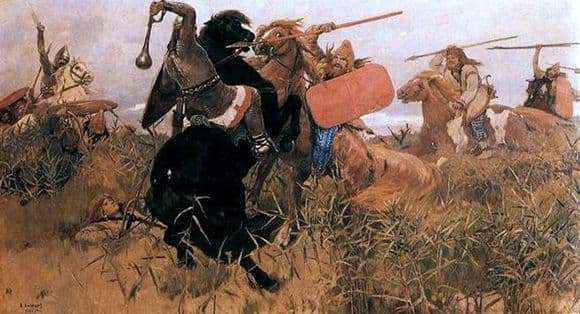 The artist Vasnetsov proved himself as a wonderful master in depicting everyday scenes. He was also interested in the religious theme, and with it the motifs of folk tales. But this does not stop the painter in the skillful mastery of different genres. The historical-historical direction occupies the period of Vasnetsov’s creative work from 1880 to the end of the 1890s.

A rather large canvas on the heroic theme was written with a characteristic scope, but with some historical inaccuracies. In fact, the Scythians lived centuries before the Slavs. But this fact was not known in the 19th century. In the guise of the Scythians, the artist writes steppe nomads, who periodically attacked the Slavic possessions.

The dynamic plot of the picture shows the battle in full swing. The Russian knight on a raven racer swung a powerful weapon at an enraged enemy. A wild nomad on a red horse raises a long spear above him. The skirmish of the riders makes them stand still in anticipation of the outcome of the battle.

Striking differences in uniforms opponents. The Slavs, as glorious warriors, are clothed in sturdy steel armor. Nomads are clearly lagging behind – they are in ordinary shirts and with the simplest weapons.

The clash occurred in the middle of the steppe of the Dnieper lands. Tall grass goes far beyond the horizon. The disturbing sky above the heroes is covered with a purple haze. The oppressive atmosphere of an imminent battle is conveyed with amazing precision and deep emotionality.

Vasnetsov in his epic paintings is in search of a lost primitive Russia.

Images of strong valiant heroes inspire the Russian explorer. “The battle of the Scythians with the Slavs” exposes the unshakable spirit of the Slavs in the battle with the wild invaders.

The picture with the image of the struggle of Russia “with the steppe” can be seen in St. Petersburg – in the 38th hall of the Russian Museum.