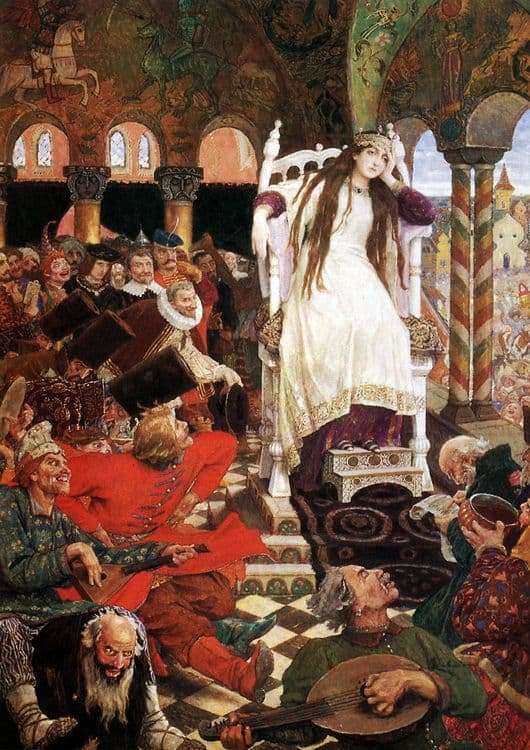 The painting “The Tsarevna-Nesmeyana” was painted according to the Russian fairy tale of the same name. It says that the king had a daughter that no one could cheer – she was always sad. He could not look at her, because his parental heart ached from the fact that the girl was withering before her eyes. So he convened the whole kingdom, announcing that those who can cheer the princess will receive her hand and half the kingdom in the bargain.

In the center of the picture you can see the princess, who is sad, despite the fact that everyone is having fun around her. It is located on a high throne. At the same time, her whole face, posture and camp express inner grief. Her eyes drooped, and her eyes were fixed on the distance. The position of the body and hands suggests that she is bored, that she is tired of all these people.

Around her are not only her father’s subjects, but also suitors who came from far away. However, none of them can cheer up the sad princess. She doesn’t care about all these people at all.

The gap between the main character and all the other heroes of the picture is transmitted through the artistic techniques that Vasnetsov used.

First of all, the princess is located on a high throne. This already suggests that the author elevated it above the rest of the mass. Her posture is very stately, which indicates its high status. The same cannot be said about the crowd of people who surround it. She is not dressed like everyone else: her white outfit stands out against the background of the dark green-red clothes of all the others. The throne, on which the princess is located, is made of ivory. The people believed that it symbolized the center of the world.

The painting was painted by the artist in the period from 1914 to 1924. Many critics argue that the author wanted to notice the position of Russia in those times with this work.