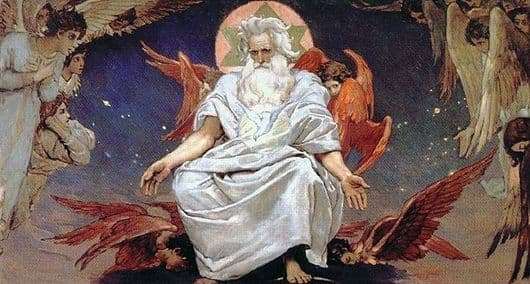 The master of Russian painting – Victor Vasnetsov completed the hard work on the painting “God of Hosts” in 1896. The painting depicts a Christian deity, begotten by the Lord of forces. In other sources, his activities are associated with liberation wars for the benefit of the captive Jewish people.

The story of this mythical hero is found in the pages of the Old Testament. Absolute power is attributed to this God. Universal opinion converges in the recognition of the hosts to the only ruler of the earth, the sky and the stars.

The same painter depicts him. He writes an all-powerful old man in a radiant, snow-white tunic, whose strong arms are stretched out in an open gesture. Vladyka opens his palms to us, as if telling the goodness of his intentions. His deep, calm look, wise by centuries-old experience, does not look at the viewer, but somewhere inside the consciousness of the deity itself. He is at the same time with us and somewhere in his thoughts. His face is surrounded by a sphere with a clearly marked five-pointed star, covered with gray strands of hair. In the center of the sage figure Vasnetsov marked a large golden circle in which there is a young pigeon.

Apparently, it symbolizes the desire for harmony, purity and peace in the universe. The environment of God is quite unusual. Right around it are mythical creatures with bodies of fire birds and human heads. They closely clung to the sovereign, kissed his shoulders and bowed to the very feet.

Fabulous syrins are frozen with an expression of awe on the gentle faces. Slightly away from the center of the canvas, we observe angelic beings, bowing their faces with a silent bow. One of the angels froze in front of the great Savaof, constantly looking at him with admiring eyes, his arms crossed on his chest in the shape of a cross. He seems to trust the divinity with all his aspirations.