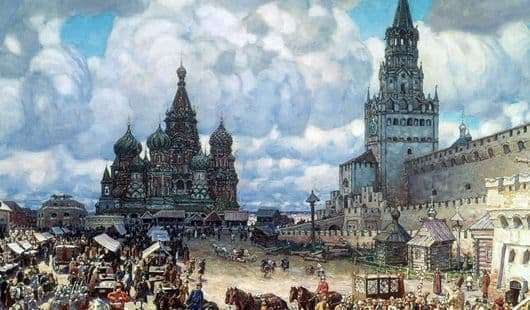 Vasnetsov was especially famous for his grand canvases on the theme of history and architecture. In them with special insight is recreated how Moscow looked in the distant 17th century. For the artist, this century was the most significant, as he believed that the architecture of this time is a real example of style for all subsequent eras. Vasnetsov was incredibly fond of the capital, so he walked it all on foot, watching the excavations and even participating in them personally. He prepared reports and scientific publications on the history of Moscow.

In his painting, all the collected scientific data Vasnetsov necessarily animated. He constantly fantasized, transmitting not just some scraps of the old way of life, but the whole picture. That is why all the images he created are incredibly authentic and at the same time filled with the romance of a national character. The painting “Red Square” is a whole panorama of the life of Moscow of the 17th century. She wants to be considered especially carefully, since its content is truly grand.

What just is not in this picture. It is all incredibly dramatic and as dynamic as possible, although the image on it is seemingly frozen. The viewer awakens fantasy. He begins to invent what is happening here and all the characters come to life in a miraculous way.

It is not every day that you have the opportunity to dive so deep into the times. The viewer can visualize the life of ancient Moscow, only having considered this grand canvas.

The picture can be identified several plans. It is important that people at that time lived together, and not apart, as is most often the case today. Here are depicted playing children, and someone is selling something nearby, here they are judging, and there Muscovites are walking. It is clear that since then life has become completely different, but the more interesting this picture.