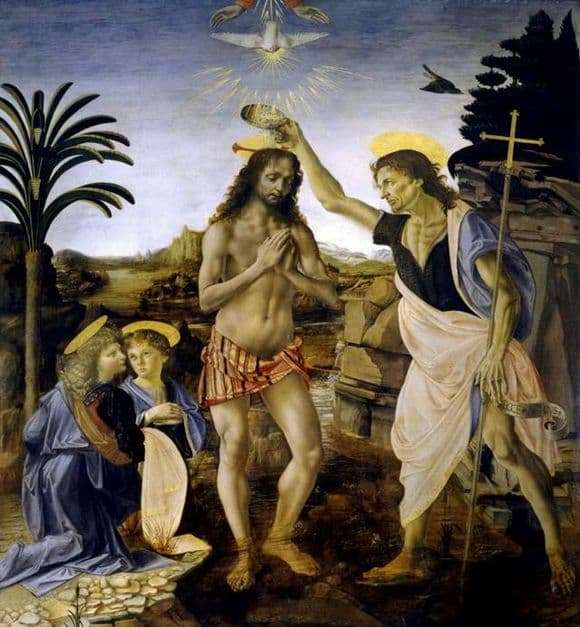 The work was written around 1472-1475. Andrea Verrocchio, specializing primarily in sculpture, carried out orders for painting with long interruptions. He couldn’t complete the “Baptism of Christ” for a long time, so he ordered one of his students to finish the work – this is how Leonardo da Vinci co-authored Verrocchio.

The angel and two figures that occupy a place in the center were depicted by Andrea: they traced his characteristic dry manner, toughness and “plasticity” of bodies. Leonardo wrote a second angel to the left, while using oil paints, and not tempera, as his mentor. Oil dries much more time and lays down a smooth layer, allowing you to transfer light and shade, a little mist over the images.

As a result, the well-known Leonard method was born. He depicted a certain part of the background, starting from his earlier sketches of the Arno River valley. Verrokko the result was more than pleased and impressed: the creation of the young student became so outstanding that it was used for copying angels.

You need to pay attention to the fact that the product is different colors and a variety of shades: it is very atypical for paintings of religious subjects. The authors put into the work elements of symbolism – this can be seen by considering the background. The influence of the traditions of medieval painting is felt.

The movements of the characters are constrained, as if they exist only in two dimensions. Individuals are deprived of individuality, this suggests that the figure is more an image than a person. The landscape has no perspective, more resembling icon painting than painting. Against the background of all the other heroes, the angel’s body on the left stands out for its naturalness and lightness.

Due to the fact that the picture was written by two great artists, very different stylistics of writing, the work looks unique and very different from similar pictures of the time.