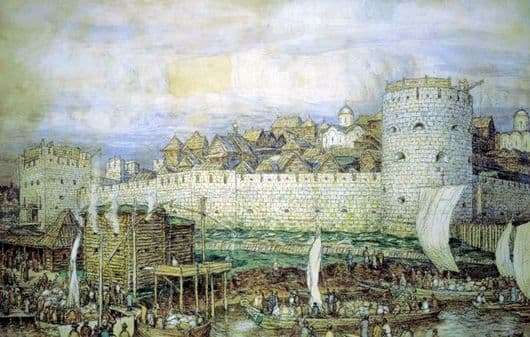 Historical paintings by Vasnetsov quite accurately illustrate the places of ancient Moscow and are important artistic specimens. His creations have always been based on archaeological essays, as well as artistic and written documents, so they are rightly considered real historical images.

In his work “In the Moscow Kremlin”, the artist captured a likely visual view of the Kremlin’s territory from the Borovitsky Gate in 1382, namely, before the Tokhtamysh attacks.

As is well known, the Kremlin-grad became one of the 4 cities that formed the territory of ancient Moscow. He was also the first stone fortress built in the north-east of Kievan Rus. At the intersections of the Kremlin with the most strategically important paths, people built the strongest and tallest towers, equipped with gates, allowing to get into the territory of the Kremlin. The gates were closed with strong steel or wooden wings. From the outside, closer to the towers, special artillery towers were placed, allowing the attack to be deflected. The most famous Kremlin towers were the Spasskaya, Borovitskaya and Nikolskaya.

In the picture of the artist you can see one of the travel towers, but Borovitskaya. From it stretches a high and strong stone wall that protects the inner city. The white stone wall was built back in 1367 instead of burnt wooden fences, when white stone began to flow into the city. It is from this small stone town that the great Moscow begins its origins.

On both sides, the fortress was surrounded by rivers – Moscow and Neglinnaya. One of the rivers flows in front of the tower, a lot of people go about their usual activities. On the river moves a few filled boats with raised sails.