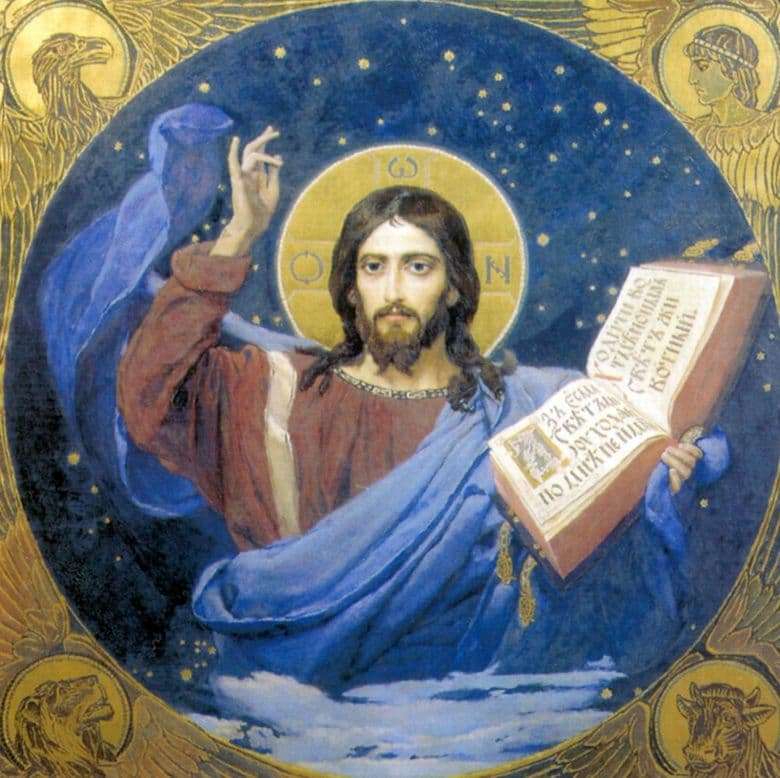 The canvas “Christ the Almighty” was created by Vasnetsov for 9 years, from 1885 to 1896. The artist depicted the image of Jesus Christ, enclosed in a circle of ideal form, in the central part of the composition, Vasnetsov made the night sky with burning stars as a background for him. Christ’s right hand is raised up, he blesses everyone who looks at him, and a large manuscript Bible is embedded in his left hand.

To complete the strict geometric construction, Vasnetsov placed symbolic images of four sacred creatures at the corners of the canvas: an angel, an eagle, an ox and a lion. They are associated with four evangelists and are made in a golden-ocher color scheme, thus creating the impression of a massive carved frame of the central round picture.

The picture is dominated by a palette of blue and brown. The color scheme of blue is compared with the heavenly, sublime and spiritual. The variety of brown and gold represents everything earthly, real and human. So the artist brings the truth of the dual nature of Christ, as the Sons of God, born of a mortal woman.

The face of Christ on the canvas Vasnetsov depicted very clearly and expressively. Eyes are especially distinguished, they literally penetrate the soul of the beholder.

Recreation of the image of Christ is central to the work of Vasnetsov. He really sincerely believed that it was the Russian artist who was destined to find the image of the World Christ and wrote about it to Mamontova.

He approached with great responsibility the search for a decent form for the transmission of deep spiritual content. And his efforts and work were crowned with success. The face of the Kyiv Almighty is comparable to the mosaic images in St. Sophia Cathedral (the 2nd half of the 13th century) and the Choir Church (14th century) in Constantinople.