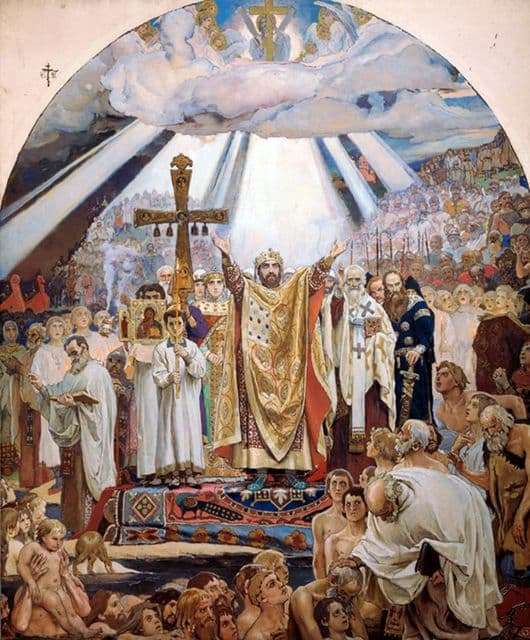 V. M. Vasnetsov is widely known as an artist who embodied religious narratives on his canvases. One of these canvases is the well-known painting “The Baptism of Rus”.

The canvas depicts the famous 988 year scene. In the center of the picture – Vladimir Svyatoslavovich, he is Vladimir the Red Sun. Despite the religiosity of the painting, the image of Prince Vladimir does not carry the features inherent in the iconography of that time.

Vladimir is dressed in beautiful festive clothes. From the abundance of gold embroidery, the sunlight falling from heaven reflects off its garments. It seems that the prince radiates light.

Vladimir’s face expresses several emotions – in his face concentration, seriousness and solemnity. He extends his hands to him, thus emphasizing the grace from the Lord, which descends from heaven to the people. The prince stands on a dais covered with an elegant carpet. This

underlines the crucial importance of what is happening. In the heavens above the clouds are visible images of angels. From heaven, they observe what is happening on earth. Divine light emanates from the opened heavens.

The prince is surrounded by many people. Most close to Vladimir Svyatoslavovich are religious ministers. They are depicted by the artist in white clothes. Clergy ministers help the prince in the sacrament of baptism. One of the ministers holds the icon of the Mother of God, another holds a large wooden cross as a symbol of the crucifixion of Jesus Christ. In contrast to the magnificence of the central picture of the picture are the images of peasants. Half-naked, exhausted, they descend into the sacred waters of the river, and the rite of baptism is conducted by an elderly priest.

In the background – hundreds of thousands of people. They all came to stand before the Lord and accept a new faith. They are afraid of this sacrament, and at the same time they strive for God’s grace.