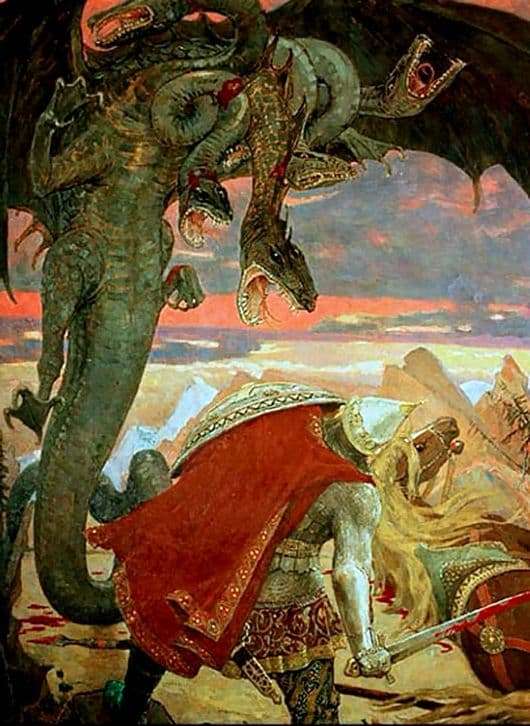 Vasnetsov enters into the life of everyone from early childhood with his pictures-tales and accompanies us throughout his life.

Bylina about the fight Dobrynya became the basis of the plot of the picture. It tells about how Dobrynya defeated the serpent and let him go, taking from him the word that he would no longer take away innocent Christians. The viewer sees Dobrynya at the moment when he brings the sword to strike.

All colors, skillfully used by the artist, are incredibly colorful. The blue black serpent closes an incredibly dark sky. It is so huge that it takes almost half of the picture. The hero is depicted from the back. The viewer does not see his face, and this is not necessary. He is not at all strong in the notion that many people have, but a completely ordinary person. We do not feel his incredible power, which we read in all Russian epics. But Vasnetsov specially creates such an image. Dobrynya is a true hero, since he was not afraid to engage in battle with the Serpent, which many times exceeds it not only in size, but also in incredible power. The viewer has the impression that the canvas is not even a serpent, but a kind of dark cloud that covers almost the whole sky. But, nevertheless, the picture is not at all dark.

The red glow in the sky creates a feeling of some alarm for the outcome of the battle. The traditional cloak of the hero of the same color. Basically, Vasnetsov used rather gloomy colors. The central figure of the picture is Dobrynya. Its silhouette is highlighted in color.