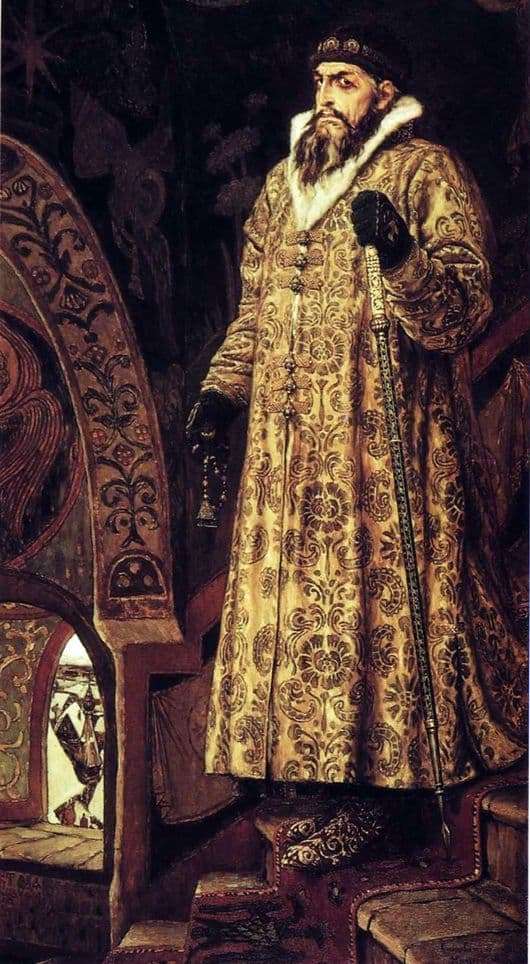 In this picture, the image of Ivan Vasilyevich the Terrible is transmitted incredibly deeply. Vasnetsov clearly showed how to create a portrait of a historical character, so that it was incredibly lively, as deep as possible and very soulful. We see the terrible just as his contemporaries describe. Most likely, the painter was helped by the fact that he was incredibly close to the creativity of the people, and therefore knew him well.

In the historical songs of the people, Ivan the Terrible appears formidable, but incredibly wise. Most likely, Vasnetsov was also influenced by ancient buildings from the times of Ivan 4, which impressed him so much in Moscow. In particular, this is St. Basil’s Cathedral, which expresses all the best that was in the architecture of that era. Most likely, this was what prompted Vasnetsov to seriously think about the personality of the king and the content with which the whole epoch was filled. It is important that he interpreted it in a new way.

The painter managed to create a truly majestic image of Ivan the Terrible. This person is distinguished by an incredibly strong will, tremendous power of mind, decisiveness, severity, some suspicion, secrecy. All these features were due to the peculiarities of the era, when conspiracies and betrayals constantly occurred. The king is above all his entourage, not only in his rank, but also in spiritual terms. We feel how distinctive and significant is the personality of Ivan the Terrible. Incredibly expressive hands.

The king’s figure occupies the entire canvas vertically, as it is depicted full-length. This is what contributes to the fact that the feeling of majesty increases to the limit. The king is above others, dominates him, but at the same time he is one with him.

The whole coloring of the picture is incredibly strict and discreet. The robe of the king passed on with historical accuracy. Architectural background created by the fantasy of the painter.

The painting was completed in 1879.