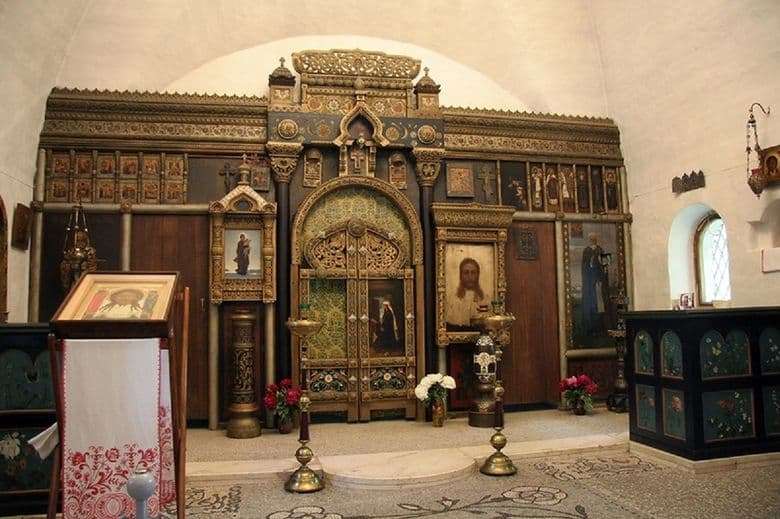 Architecture, like design, fascinated Vasnetsov, the reason for this was his participation in the Abramtsevo art circle, which zealously sought to create modern synthetic art. Vasnetsov became an architect in Abramtsevo. In 1881-1882, the Church of the Savior was not made by hands, it was built according to the project of Vasnetsov, in accordance with the traditions of the Novgorod-Pskov Middle Ages. In the architecture of that time, Vasnetsov was struck by organic integrity with obvious decorative diversity. Some time later, on the basis of the artist’s sketches, they created an intricate facade of the Tretyakov Gallery in Moscow.

The artist worked tirelessly on the interior for the Church of the Savior, not man-made. So he created for her decoration a small image in the iconostasis of the Mother of God, the image of “St. Sergius”, “The Annunciation” and a few more small images. The artist also painted the choirs with images of flowers and butterflies, and also laid out a mosaic floor, which was originally poured with cement and stood out sharply against the white walls of the temple.

The decoration of the church does not give him peace day or night. He always comes up with and draws new details: windows, arches, columns with ornaments.

Vasnetsov categorically did not want to see anything ordinary in the church, he had one basic desire that the whole creation of creative uplift corresponded to the joyful mood with which it was built. Even the artist embodied the floor in the form of an artistic layout of the pattern. He created a sketch of the drawing, which was to decorate the floor. He personally and repeatedly took part in his calculations, directing the curves of the line and picking up stones in tones. As a result, a huge, incredible flower all along the floor.

In 1882, the Church of Our Savior was sanctified.