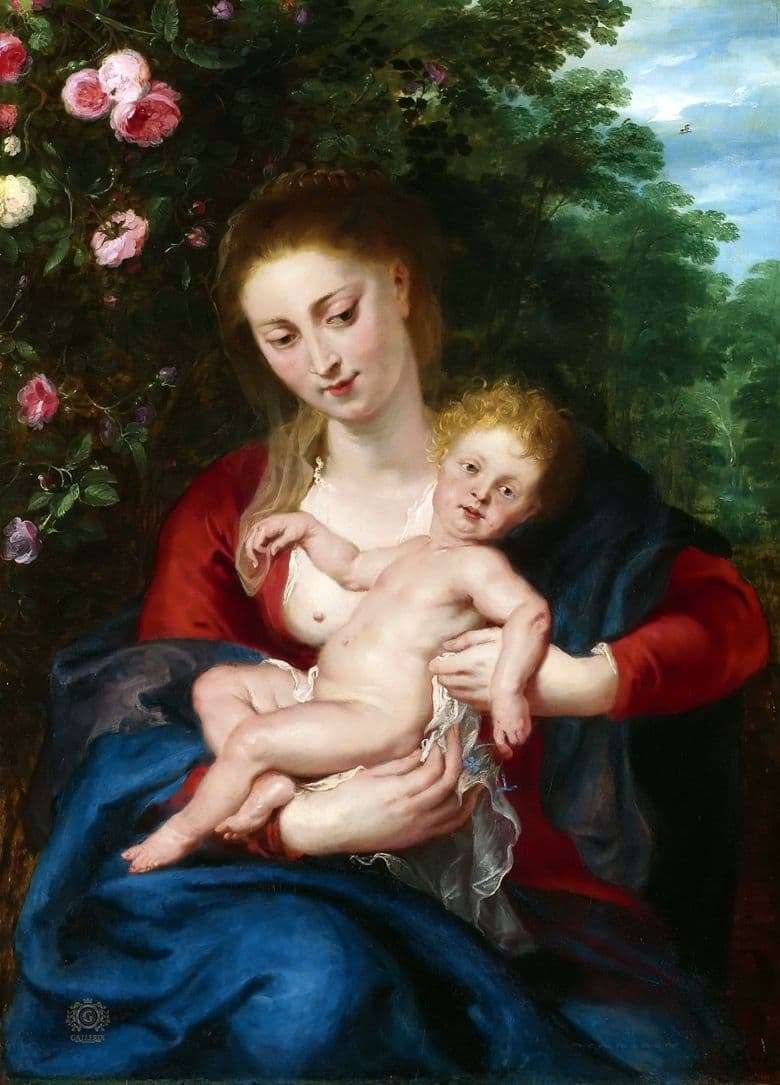 In the painting by Peter Paul Rubens, “Madonna and Child”, there is an image of Our Lady with Jesus in her arms. The image of holy people is always attributed to religious subjects. However, here we do not see any references to the Bible writings. We can say that we have a household story: a mother with a child went for a walk in the garden. This way of depicting the Mother of God and Jesus brings these saints closer to us, making them earthly, understandable and accessible to all people.

In the center of the canvas is Madonna. The artist decided to portray a woman more understandable to him and to the European man. We do not see here tanned skin and dark hair, which are typical for people of those places where Mary lived. Jesus is also depicted as a light-skinned. The child’s hair color is very close to gold, which indicates the exclusivity of the baby.

Maria has light blond hair. A part of the curls is braided on the back of the head in a braid, several strands fall down on the shoulders of the girl. She seems a bit disheveled, young, as if she had just returned from a walk. The girl is wearing a red silk dress, as a symbol of blood, which will be subsequently spilled by her son. On top of the dress is a large blue cape, which also serves as a veil for the child. One breast of a woman is naked – she just fed her son.

Jesus is depicted without clothes, but Mary tries to wrap him in a thin, lace, snow-white fabric. The child is not a newborn, he is over a year old. In his hands he holds several plucked cornflowers. Mary is depicted calm, peaceful. Her lips quirked in a slight smile – she admires her son. Jesus also rejoices: Mom took him for a walk outside and fed him.

In the background of the work is a small woods with tall trees. Directly beside Maria was the tea rose bush. Delicate, fragrant buds give the work freshness and personify the youth of Our Lady.