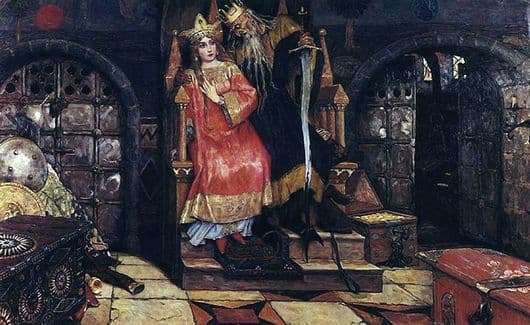 The canvas “Koschey Immortal” was written by the famous Russian painter Viktor Mikhailovich Vasnetsov for nine years. It was fully completed only in 1926, chronologically, the picture was his last work. Since childhood, each of us has heard from parents a fairy tale about an old man named Koschey, representing universal evil for the characters of Russian folklore.

In his works, Vasnetsov often turned to motifs from Russian fairy tales; he could put a soul into each made-up character. The images on his canvases have always looked as realistic and humane as possible.

The picture has three main colors: rich chocolate, alizarin red and gold. Everything is designed to show that the action takes place in luxurious mansions, decorated with rare species of wood and studded with gold and damage. The character of Koshe is incredibly greedy and stingy, as can be seen on the canvas, the artist showed these features with the help of several massive chests placed in his mansions and, apparently, to the top filled with jewels and trophies.

Among all this magnificence, the artist depicted a gloomy old man in a golden crown, who captivated a young girl. Koschey interested looking at his prey with empty eyes. It seems that he has no soul left, before us is only the shell of a terrible body, inspiring fear, disgust and a little pity. The girl does not look at the old man, the gaze of the beauty with horror and indignation is turned to a long sword, at the end of the blade of which the dark human blood has frozen.

Many contemporaries of the great artist noted that during the writing of the canvas, he experienced many sufferings caused by unrest in the country. Perhaps this sword is a sign for the observers, a kind of message to the people of the future about the cessation of hostility.