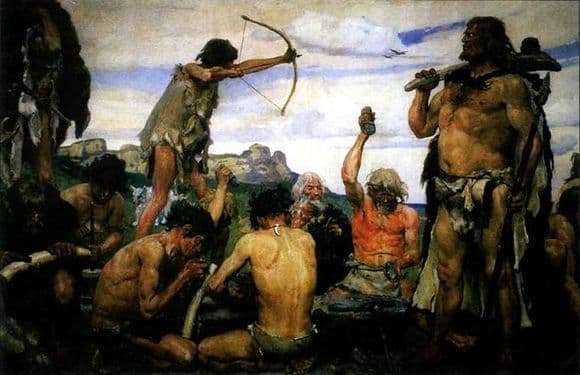 Victor Vasnetsov in 1884 began work on a series of paintings, which he called the “Stone Age”. The idea of writing such compositions belonged to an archaeologist, Alexei Uvarov, who offered the work to Vasnetsov. As a result, several paintings were created, which the artist combined in a panel. Now they are in the State Historical Museum, in Moscow.

Vasnetsov managed very realistically to depict the life of ancient people. It shows everyday activities such as hunting, feasting, ritual activities. It is surprising that Viktor Vasnetsov managed to write it on a fairly large canvas.

The Stone Age shows us what ancient people looked like. The artist depicted a handful of people, all of them in loincloths. They have melted hair. Their bodies are swarthy and muscular. In the center is the leader. He is the tallest and strongest of men. His face is stern, and his hands are holding weapons. The rest are sitting around.

A woman repairs clothes, other men sharpen spears, and one of the hunters even takes a bow from a bow to flying birds. Several people drink from clay pots, and some just sit as if playing some kind of game. There is a child in the picture. This is a boy, who is surprised to observe the actions of the old man. A gray-haired old man sharpens a stick.

The panel is written in oil. Vasnetsov did not specifically use bright colors to make everything look natural. Brown, beige, white – the artist took all these colors from nature itself.

Vasnetsov very carefully thought through every movement of the characters. He consulted with historians, art historians, archaeologists. As a result, he managed to convey the atmosphere of the ancient world. The painting “Stone Age” can be considered as truly one of the most reliable, from a historical point of view, paintings.