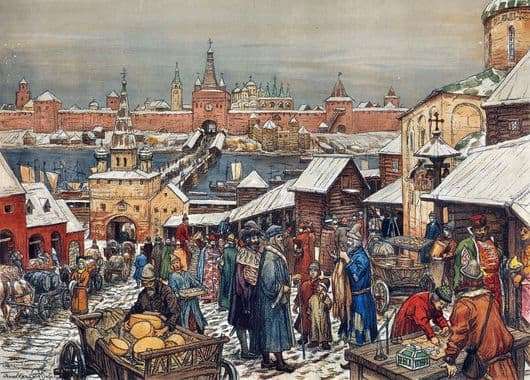 The picture made one of the most famous squares of Novgorod. In the foreground, one can observe trade shops and rows that are permanent, in contrast to the wagons with goods that come here from all sides of the great city. The artist surprisingly conveys the whole atmosphere of that time, and if you look at the picture for a long time, you can even feel the buzz that stands in the square from the shopkeepers.

It is amazing how accurately not only the atmosphere is transmitted, but also the nuances of the clothes of that time and some details of the general form. Among the whole composition, entourage and all people, there are several people in the middle of the picture, apparently foreign guests who came from Germany. Here are visible and notable merchants and boyars. You can see the river and the bridge that goes across the river directly to the city gates.

The whole picture is written with perfect accuracy. It’s amazing how Vasnetsov picked up the colors that described the clothes of people in the square and the buildings around them. No wonder they say that Novgorod was the richest trading city, where, if desired, you could find everything.

The life of these people is also fully traced, for example, in the lower right corner, men with a bag over their shoulders appear to exchange money, for which he has special scales on which he weighs rubles. Yes, yes, that is right, at that time, not a monetary unit was considered the ruble, but a weight measure.

Based on all these subtly and accurately spelled out nuances, you might think that the artist spent a lot of time studying these historical subtleties. Each costume corresponds to the costume of that time, for this the artist uses short strokes, thanks to which he gets a very unique way to paint the whole picture and emphasize the image of the area.