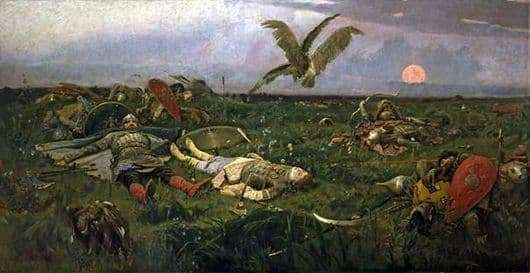 Vasnetsov drew the viewer’s attention to the events that took place during the formation of Kievan Rus. However, this picture was written in order to show people courage and courage of the spirit, regardless of the outcome of the war.

This picture reveals to us the events that have become legendary and were captured in a chronological source called “The Tale of Bygone Years”, which the Nestor the Chronicler conducted in the most careful manner. In this collection of exploits and military actions, the “Word about Igor’s Regiment” has found its place; from the literature course this tragedy is known to everyone from school.

It is not for nothing that the artist depicted death and despondency; this makes it clear that, even knowing what the outcome of the battle would be, the army of the gallant prince did not give up and went to his death, sprinkling the earth with blood and sweat. The figures are not depicted in a chaotic manner, but in such a way that, when they are Rusich, they died fighting for the Russian land, fell with their arms outstretched, in order to cover their native land with as much as possible with their bodies. The young man pierced in the heart with an arrow, the mighty bogatyr, lying face down on the ground scattered in only the fate of one understandable order, was well remembered.

The picture is imbued with pride and greatness. The artist specially glorified death in order to give more passion and faith to the cause for which you undertake. This picture served as a motivator for military actions of the second half of the 19th century. She was the inspiration for the feat of arms and nobility, patriotism and self-sacrifice.

With his creation, he didn’t invite fear of death, but, on the contrary, go to war with the thought of death, as something majestic and inevitable, but so that it was for the purpose, with the memories of descendants with admiration. Vasnetsov was not afraid to take the side of the opposition and sacrifice his work for good ideas and goals.