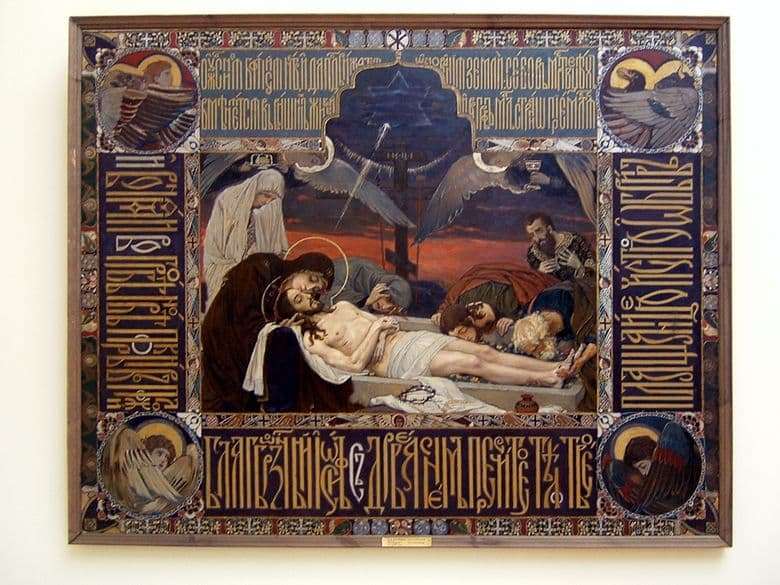 The painting “The Shroud” (otherwise it is called “Laying in a coffin”) was painted by Viktor Vasnetsov in 1901. It depicts the gospel scene of the funeral of the crucified Jesus Christ.

In the center of the canvas depicts Christ in full growth, which lies in a coffin. His body is laid on the shroud, which is saturated with incense. At the head of Christ, the Most Holy Mother of God in black robes is shown bent toward him, clinging to his forehead with his lips.

Not far from it stands John the Theologian. Next to him, on the other side of the viewer, his wives clung to the tomb – the myrrh-bearers and the secret disciples of Christ – Nicodemus and Joseph of Arimathea.

Along the edges of the canvas, along the entire perimeter of the image, it is painted with words from the text of Great Saturday Saturday

In the corners, on top of the correct rectangular shape, four different images are inscribed, symbolizing the evangelists.

The canvas has a rich color gamut, detail and clarity in the transfer of images.

In the image of this picture by Vasnetsov, sketches were created, on which Prahova later embroidered the cardboard of the shroud of the high altar of St. Vladimir’s Cathedral in Kiev.

Vasnetsov’s hand does not belong to a single canvas of a similar subject, which expresses warmth of heart, spiritual wisdom, courage and resilience. All these qualities are characteristic of Russian saints and the artist has always sought to emphasize this in his works.

To date, the picture of Viktor Vasnetsov is in the State Tretyakov Gallery in Moscow.