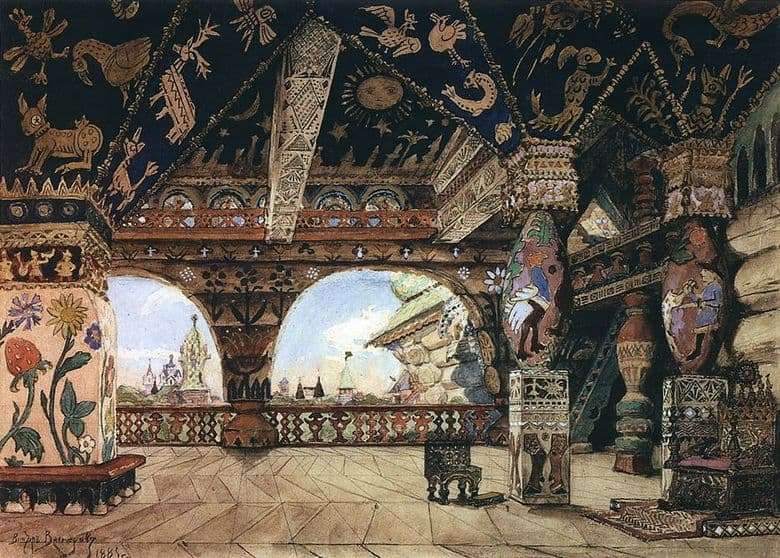 In 1873, Alexander Ostrovsky wrote his famous play “The Snow Maiden”, which was put on the theater stage. Many masters of that time were engaged in scenery for staging; however, a special place is occupied by the works of Viktor Mikhailovich Vasnetsov. In 1882, he designed the play staged in the Abramtsevo circle. Sketches of “Snow Maiden” aroused great interest, and in fact opened up a new style of theatrical and decorative art.

“Snow Maiden” – a fairy tale, which takes place in the fictional country of Berendeys, in the distant past. It stands out from the general tendency of Ostrovsky’s creativity, filled with the gloomy reality of everyday life, tragic loneliness and the tension of a darting soul. In “Snow Maiden” the love and youth reigns. The philosophy of the joy of life peeps through the phantasmagoric fairytale shell. Ostrovsky gives the folk tradition, legend, song a special unique flavor.

A special place in the play is occupied by the figure of Tsar Berendey, personifying popular wisdom. The ruler, nobly worrying about his subjects, that fills their soul, is immensely kind and honest.

In 1885, Rimsky-Korsakov staged an opera of the same name, and Viktor Vasnetsov worked on sketches and scenery again. It was then that the “Chambers of Tsar Berendey” came into being. The royal mansion is transformed into a bright, picturesque stage filled with unique details of architecture and other elements of national art, the palette of colors is rich in bright colors. Now Vasnetsov’s watercolor is in the State Tretyakov Gallery.