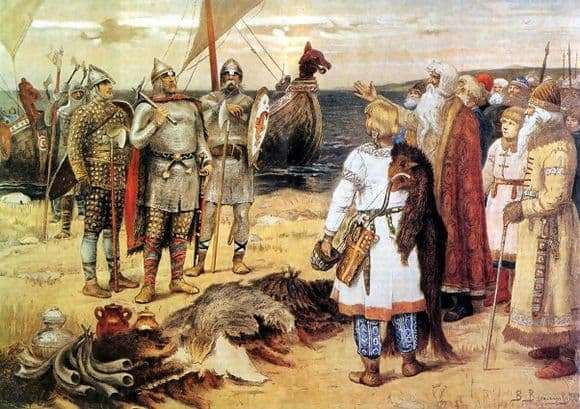 This picture was painted by the great Russian painter in 1909. This painter wrote his works on themes of Russian history, epics and fairy tales. He fantasized mainly from the images of Russian folklore. Work done in oil on canvas.

The foreground shows the Vikings, who sailed on their ship, previously called rooks. The ancient Russian inhabitants of Scandinavia are the Varangians, who meant the soldiers in the service of the Byzantine rulers.

In The Tale of Bygone Years, the chronicler begins the history of Russia with the mention of the Varangians. It can be seen in the picture that the Varangians in Russia came to fight, they served from the Russian princes, helping them in military campaigns, as they were busy with the merchants, protecting their goods. The Varangians in the picture are depicted in powerful brilliant armor, chain mail, in their hands they hold shields depicting the arms of Normandy, spears and swords.

Ahead probably stands Rurik, the Varangian leader, who became the ancestor of the first royal dynasty in Russia. The artist described their faces, proudly raised up, it is clear that these people are not afraid of the severity of hostilities, they participate in negotiations with dignity.

They are met by Russian people. A tall, stately old man with a big gray beard stands in front of him, in a gesture of greeting he extends his hand forward, thereby inviting them to negotiations. He has rich clothes, most likely it is the prince who called on the Vikings to help in military actions. Next to him is a young archer, which is directly connected with the extraction of expensive furs, he has a wild boar skin on his shoulder. Next to the prince is the people who came to meet the hired warriors.

It is clear from the clothes that these are not simple peasants, but people deserved and close to the prince. Behind the prince is a young man who was called to study so that they would observe the course of the negotiations. Ahead of the Russians is the negotiated price: furs, pottery, horns, used to deliver sounds during a battle. In his picture Vasnetsov wrote a historical move in Russia.