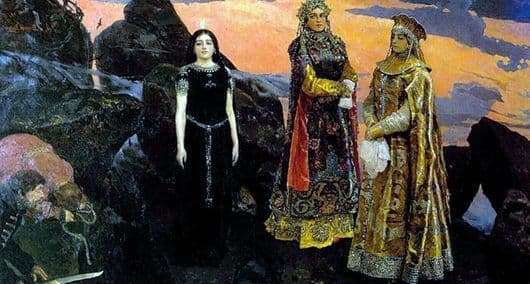 This picture Victor Mikhailovich Vasnetsov wrote under the order of Savva Mamontov, who at that time served as chairman of the board of the Donetsk Railway. The plot of the canvas is allegorical. Fairy princess is the embodiment of wealth, hidden in the thick of the earth. In the legends of the Russian people, there were only two princesses – gold and precious stones (in some sources it is called copper). Especially for railway customers, Vasnetsov introduces a coal princess into the plot.

The background of the picture is divided diagonally into two almost equal parts. The bottom shows the earth, rocks and huge boulders, and the upper part is given under the image of the evening sky. The colors of earth and sky form a sharp contrast between themselves. This creates a feeling of anxious foreboding, excitement and tension.

In the foreground we see three female figures. These are the princesses of the underworld. By their postures and facial expressions it is possible to determine how girls relate to people and the earthly world. The Golden Princess is strict and arrogant, her gaze is lowered. The copper princess is more supportive, she is curious about a new environment for herself. Older sisters are dressed in rich outfits corresponding to their high status. Their bodies are slightly turned to each other, forming a single group. As if the princess at the same time in their attitude to what is happening.

But the younger sister, the coal princess, looks frightened, pale, timid, and from this more humane. It is evident that it is harder for her to leave her home. The costume of the coal princess is more unpretentious, there is almost nothing in it with the luxury of the clothes of her sisters. Hands girls powerlessly dropped along the body. Other princesses majestically crossed their arms in front of them. In the lower left corner of the picture depicts the figures of two men, pleasingly bowing before the underground rulers. It is known that Vasnetsov finished these characters much later, when the main idea of the painting was already embodied on the canvas.