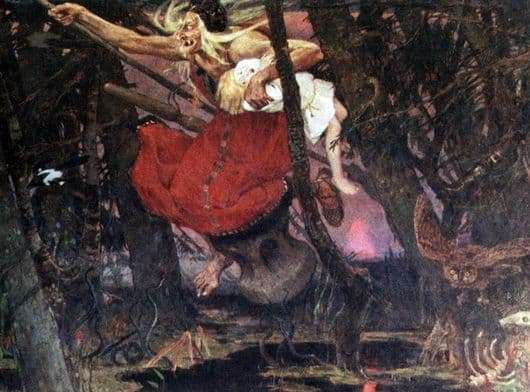 Baba Yaga is a literary character of almost all Russian fairy tales, where she is assigned the role of a terrible villain abducting children. But among artists, the theme of fairy tales for some reason did not catch on, because right up to the end of the XIX century, painters prefer to depict something realistic or classical, but not fairy tales. The only exception is the work of V. Vasnetsov, who already at the dawn of the new century embodies his old dream, to tell the world about all the beauty of the Russian fairy tale, which from his very childhood has been exciting and fascinating. Therefore, in 1917, the famous painting “Baba Yaga” was born.

The plot of the picture is quite simple, but, nevertheless, interesting. Among the trees raging and howling under the gusts of wind she flies – Baba Yaga, setting her broom forward to wipe out all the good and light from the face of the earth, leaving only evil. Vasnetsov depicted Baba Yaga in the form of a bony old woman with white, flowing hair in all directions, wearing a red skirt. As she should be, the old witch bears herself into the lair of a little boy who only seemed to have pulled out of bed. She is not afraid of anyone, her expression solemn, and angry, her mouth parted, showing the viewer the whole abomination of sharp teeth.

The artist was able to portray her so strongly that sometimes it seems as if she is ready to leave the picture, directly to her audience.

The character of Baba Yaga in the very center of the canvas, but in the distance, looking closely you can see the glow of the fire, and the right side shows an eagle owl, a companion of the night, the bird itself is gloomy.

In general, the whole plot is so sad and tragic that sometimes the question arises how such a cheerful artist like Vasnetsov could write such a tragic work. The researchers of his work associated this picture with the October Revolution, which, like Baba Yaga, suddenly broke in, lit a fire and stole thousands of lives. This is confirmed by the red color of the character’s skirt, since red, as we know, was the central theme and symbol of power among the Bolsheviks.

Maybe this is so, but the artist himself did not leave any records on this subject. And the picture has become one of the best in his creative destiny.