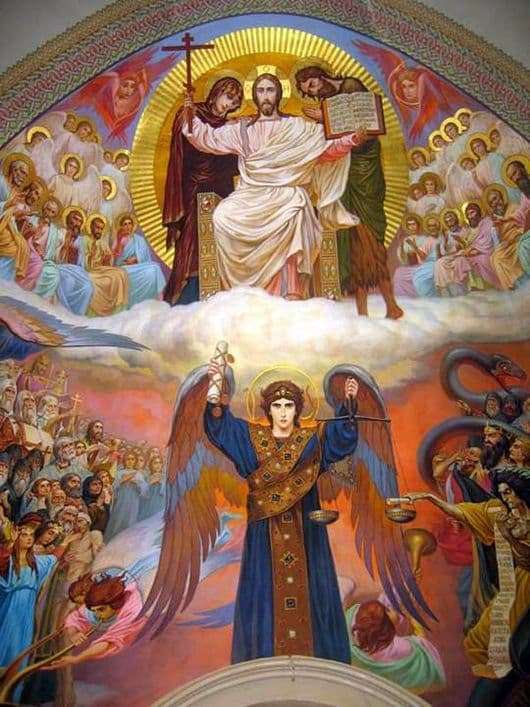 The artist Viktor Vasnetsov created a lot of religious frescoes. For the decoration of St. George’s Cathedral by Vasnetsov in 1896-1904, a painting-fresco “The Last Judgment” was painted, the first variation of which was painted by him in 1885-1896 for the Vladimir Cathedral in Kiev. We will talk more about the first and original version of the author, although the plot of all three options is unchanged.

Colorful scenes of the baptism of Russia on the walls of the temple were balanced by the gloomy composition of the “Last Judgment”. Dark colors with many shades of red, which makes the viewer treat the picture as a serious work and adds tragedy to the image. Denying the existing canons, Vasnetsov painted frescoes in the style of the ancient and somewhat theatrical.

The plot of the picture is based on the Biblical concept of the Day of Judgment, when people are divided into the righteous and the sinners. The first are awarded, and the second, respectively, punished for their actions. In the center there is an angel with scales, around which the composition is built: below, on earth, the court is ruled, where the righteous are to the left of the spectator, turned to heaven with prayer, and to the right are sinners burning in hellfire.

In heaven is the Lord holding the gospel and the cross, and next to it we see John the Divine and the Virgin, as well as angels and apostles. The face of God is illuminated by anger against sinners, who in the plot of the picture will burn in the fiery Gehenna, where the Serpent winds. “All are equal before God”, Vasnetsov wants to say, showing the same conditions for the court of Kings and poor peasants. Heralds of the Doomsday – the trumpeting angels, unite the celestial sphere with the earthly one, floating in the air between them.

The author of the picture plays in contrasts and builds its elements in such a way that the work begins to evoke a sense of mysticism. And thanks to the masterfully constructed composition and superb drawing of the Last Judgment illustration by Vasnetsov, many rave reviews were received. 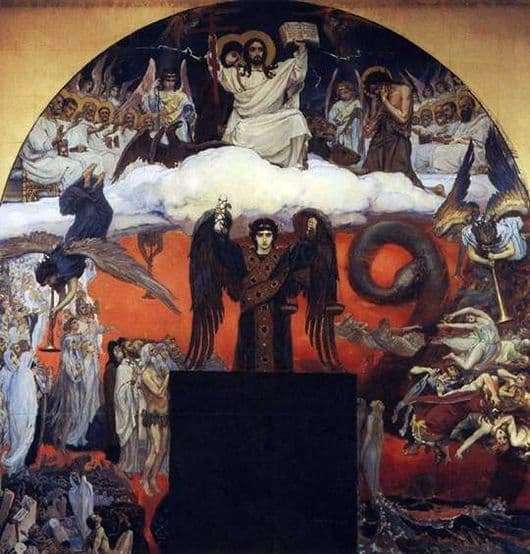 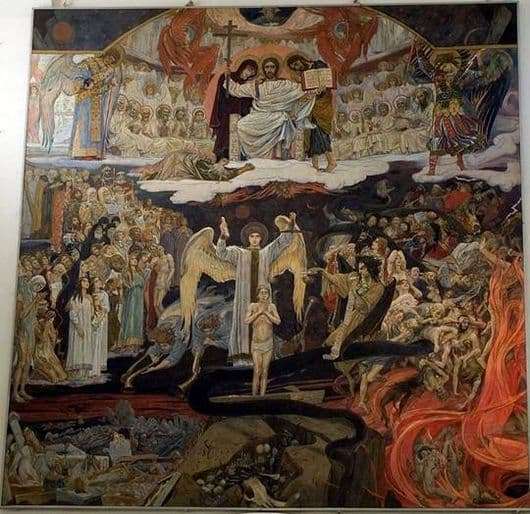