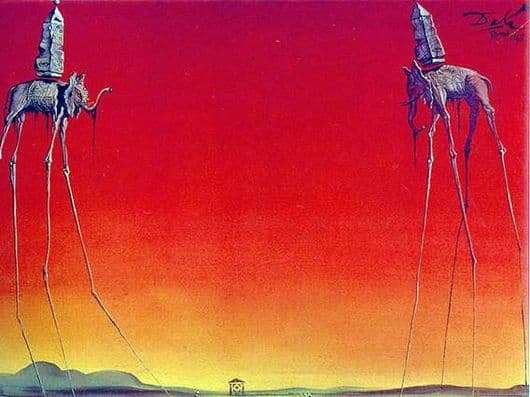 The painting “Elephants” by Spanish artist Salvador Dali was written in 1948. For the first time, an elephant of a type image was depicted in the painting “A Dream”. The image of a mythical elephant with long legs and an obelisk on its back is present in many of Dali’s paintings, this is the “Bernini’s Elephant” or as it is called the “Minerva Elephant” bearing the attributes and obelisks of the pope. This is a large depiction of Dali’s elephants, inspired by a sculpture by Jan Lorenzo-Bernini – an elephant with an obelisk on its back. Perhaps this picture does not carry a certain meaning, but is filled with elements that were once seen.

Which shook the artist for various reasons. It is difficult for many non-artists to understand the fragment depicted in the picture, but any absurdity is a fragment of the fact from the artist’s life. The picture on the background of the sunset shows two elephants on their feet – stilts. The color range of the sunset is made in bright colorful tones, smoothly changing from bright orange to delicate yellow. Under this extraordinary sky is the desert, in the distance with the rising hills of sand. The surface of the desert is smooth, as if unaware of the wind. Along it, towards each other, there are two elephants on very tall and thin legs with obelisks on their backs. It seems that at the very first step, legs can fold under the heavy weight of an elephant. One elephant has its trunk pointing upwards, giving the impression of joy, while the other one is hanging down, like the head of an animal, giving it an image of sadness and sorrow. They are covered with patterned carpets in shades of gray, like elephants.

Below the elephants under their feet are two human silhouettes with elongated shadow reflections. One visually looks like a man who is standing, and the other, running with his hands up, reminds a female image. In the center of the picture is the outline of the house of an unusual image. The canvas is written in the style of surrealism with the unrestrained flight of the artist’s fantasy. Despite the style of presentation in a distorted form, the picture is clear to everyone.