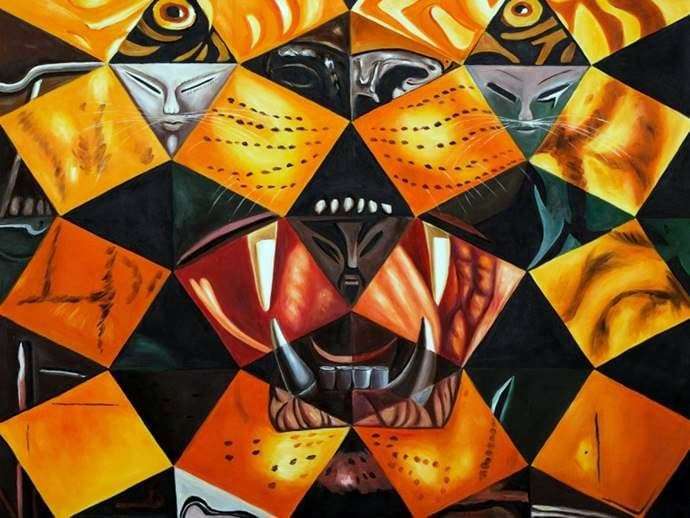 Pictures of this Spanish artist painted in the style of surrealism. This is a flight of fantasy without frames and restrictions, where everything is clear at the level of intuition. Often, completely new parts, faces and forms start to appear from the general view. And the longer to peer, the more fully the inner world of the picture will be revealed.

Cloths were created by the master in a fit of feelings, at the peak of an emotional wave. Probably, therefore, any of them is perceived as a whole, where every detail and every light reflection is important. Inconsistency and shocking, complete freedom of spirit – these are the main features of Dali’s creativity. His works completely ignore the natural and physical laws, and quite naturally combine incompatible things. In different periods of creativity, the artist creates quite pictures, unlike in style and color scheme. The older the master became, the more intense the atmosphere was in his canvases.

The Bengal Tiger is made up of separate squares in which fragments of the life of different people and countries are visible. One gets the impression of a collective image of the world. The image of the tiger appears as protection from evil, the triumph of life. Made in rather aggressive tones of yellow with splashes of numerous shades of black and elements of red and white colors, the picture is filled with inner strength and dynamism.

The look delays in depths, like a funnel. Gradually, layer by layer, all new details are revealed, and then the whole begins to look in a completely different light. The compatibility of the incompatible was manifested most vividly in the Bengal Tiger.