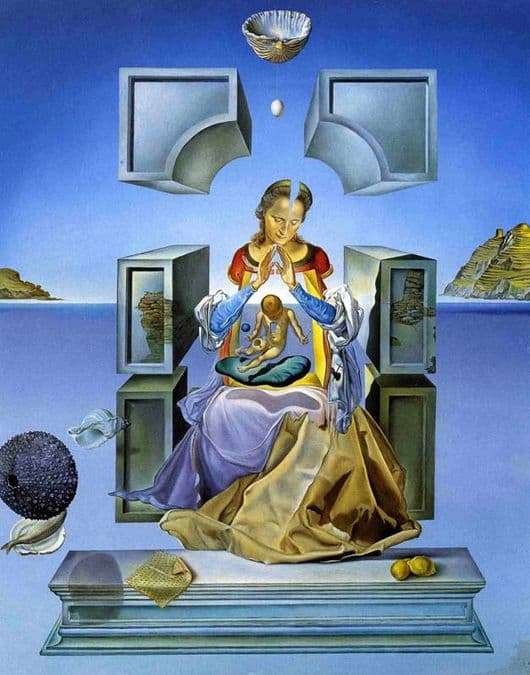 Being once an unbeliever, the psyche of Genius has changed dramatically, and he turned into faith. These changes were immediately expressed in his work – strange images combined with Christian motifs along with mysticism.

He created two versions of the painting “Madonna of Port-Ligat.” In the face of the Mother of God can be traced the features of his beloved wife Gala, whom he tried to depict on many of his canvases. The Holy One is dressed in a monastic outfit, which at that time was considered traditional, where the central part is ajar and forms an aperture, and a child is visible from it. This is Jesus Christ. He also has an opening in his chest, which symbolizes the union of mother and child.

Madonna is seated in a split arch in two, and the child hovers over the pillow, and perhaps it is a blue cloud. Above them is a shell denoting St. Jacob, and an egg above the head of Madonna. Writing such a picture without applying the effects of an effective image, a critical manner and the illusion of reality, reveals the artist’s desire to work in the classical style, which he considered to be the pinnacle of artistic development.

Using the appearance of his wife Gala to portray the image of the Mother of God, critics regarded it as cynical, but Dali did not intend to change his mind.

The artist clearly understood that it would be difficult to convince Spain and the whole world that he sincerely, as a true Catholic, wrote this picture. But despite this, the picture is now one of the most expensive and valuable works of art in the world.

In 1949, Pope Pius XII blessed this picture, and El Salvador brought it to him as a gift.

The influence on the artist of the art of the Renaissance in this picture reaches its highest point. Fragments of images reflect Dali’s Nuclear Mysticism, which can be traced in his other works from this period.