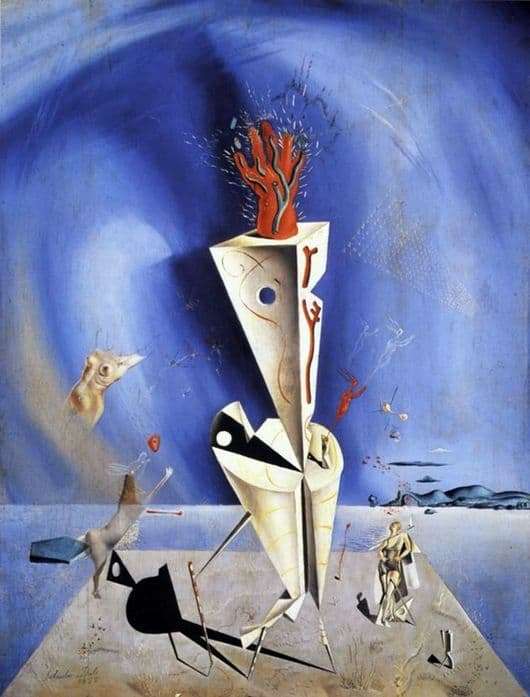 “The device and the hand” – one of the classic canvases of Salvador Dali 20s. The artist at that time experimented a lot, looking for his style.

The space depicted in the picture is completely invented. This landscape is partly connected with the “normal” reality except the hills in the background. The main role is given to a dummy, a certain device.

Adaptation – these are two unusual geometric shapes, standing one on another. The lower figure stands on the ground, on thin legs and with something resembling an equally thin cane. The upper figure rests on the bottom without external devices, balancing with a sharp end.

If you look at the painting “The Device and the Hand” from the point of view of symbolism, you can see that everything monumental only seems so, in fact, everything is rather unsteady.

In the picture you can see other traditional Dali images: the female torso appearing in the sky (only the torso is without arms, legs and head), the statue. Almost all the objects depicted in the picture are partially visible and partially only marked. This creates an impression of fragility, inconstancy. The device is crowned with a huge blood-red hand that grew out of the device.

In this picture, Salvador Dali used some of the design of the French surrealist Yves Tanguy. First of all, the influence of Tangi is traced in the triangular outlines of the device. The pose of adaptation, as well as the cast shadow, was borrowed from the Italian surrealist Giorgio de Chirico.