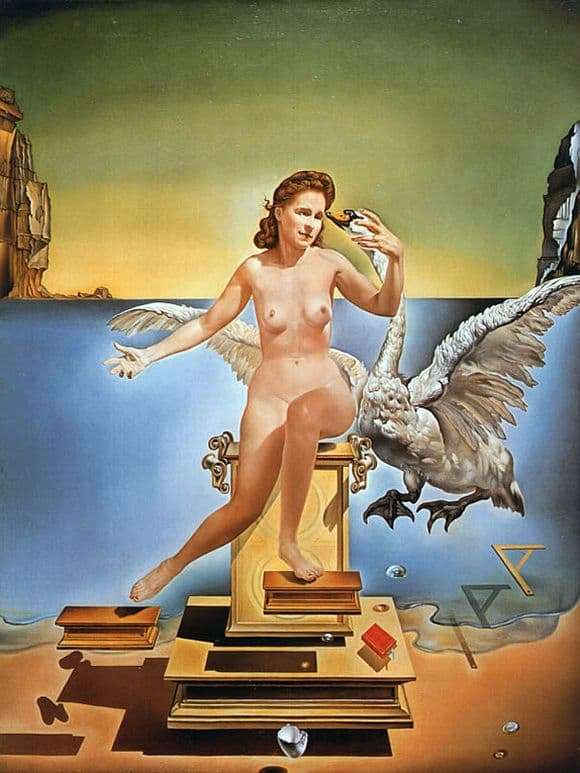 Today, the film “Atomic Leda” can be seen in the Theater-Museum of Salvador Dali in Figueres. The author of the canvas, as it does not sound strange, was inspired by his discovery of the atom and the dropping of atomic bombs on the Japanese islands in 1945. The terrible destructive force of the atom did not frighten the artist at all. Information about elementary particles that never come into contact with each other and, along with this, forming the surrounding reality and the objects around, became a new source of the master’s creativity and key subjects of the paintings. Moreover, Dali, who could not tolerate any kind of touch, saw in principle the structure of the world a special symbolism for himself.

Atomic Leda was written in 1949. The picture is based on the ancient Greek myth about Leda – the ruler of Sparta and Zeus – the god of all the gods of Olympus, who fell in love with the queen and appeared to her in the form of a swan. After that, the queen laid an egg, from which three children hatched – Elena Troyanskaya and the twin brothers Castor and Pollux. With Castor, the master identified his elder brother, who died before his birth.

Dali made a huge number of sketches and sketches for this work, carefully and with a certain intent, placing each of the objects. As already noted, the image of every detail corresponded to the discovery of the “inviolability” of the intra-atomic structure. The name of the picture itself underlines the new, grandiose information about the atom, whose internal structure served as a composition for the image – all visible objects float in the air and do not touch each other.

The image of the Spartan ruler, the artist wrote with his wife Gala. This fact is constantly being discussed eagerly and gives rise to various assumptions and conjectures. Dali himself said that he relates himself to Pollux, and his spouse – with Helen. But as seen in the picture, Gala embodies the image of Leda. Given this, many art critics say that for Dali his wife, a few years older than him, to some extent replaced him with his mother. Considering her marriage to Galya as a gift of fate, Dali decorates Leda’s hand with a wedding ring and lifts her on a pedestal of worship and admiration.

Two more important subjects in the picture – a square and a book. Square and ruler, in the form of a shadow – the integral tools used in geometry. They also indicate a mathematical calculation, and in the artist’s sketches the proportions of the pentagram, called the “golden section,” are traced. In these calculations, Dali helped the famous Romanian mathematician – Matila Gika. The book, according to many assumptions, is a bible and an indication of the return of the artist to the Catholic Church.

The background of the picture is the land and the sea, like all parts of the picture, not in contact with each other. Salvador Dali interpreted this moment on the example of one of the sketches, explaining that this is how he sees the projection into the reality of the origin of the “divine and animal”. The rocks on the sides of the picture are part of the Catalan coast, where the artist was born and raised. It is known that when Dali worked on the canvas, he was in California, thus, longing for his native landscapes splashed out in the pictures of the creator.