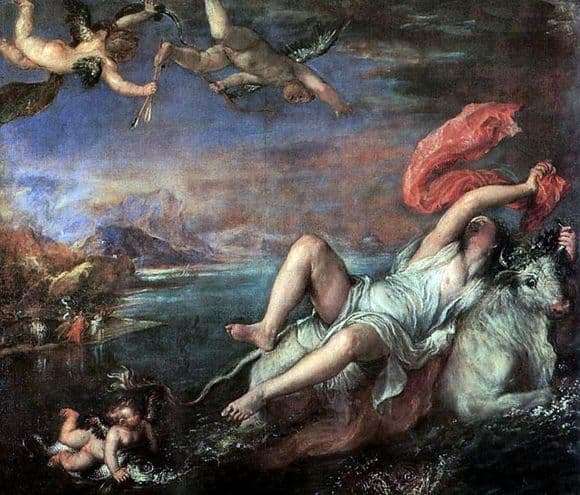 Titian in addition to writing portraits and images of biblical scenes, often turned in search of inspiration for creating new beautiful paintings to ancient mythology. The story of the abduction of Europe attracted the attention of the artist the opportunity to express in dynamics the range of strong emotions of the characters. He created the same picture by 1562.

Myths tell us an amazing story. King Agenor had sons and a daughter Europe, famous for his unearthly beauty. One night, she had a restless dream: two women fought for Europe, embodying two continents – native and unknown to her; alien land won out in the end. Waking up from a nightmare, the girl began to pray relentlessly that the gods would not allow what happened in a dream. And then she went for a walk in a meadow by the sea with her friends.

Young girls had fun and collected flowers. Their ringing voices were heard by the mighty Zeus, and when he saw the beautiful Europe, he instantly fell in love with her. Having decided to kidnap the beloved, the thunderer turned into a bull and calmly approached the company of her friends. They surrounded a beautiful calm animal with golden horns and shining velvet fur. The bull sat on the ground as if urging the girl to sit down, and Europe could not resist the fantastic creation. Then Zeus abruptly rushed from his place and quickly reached the sea, and then sailed like a dolphin to the island of Crete, where he married the kidnapped.

The painter Titian depicted the moment when the two main characters are on the crest of a wave. Europe turns in alarm to the shore, where two female figures rush in horror to her, disappearing in the waves. The clothes are crumpled and strip the magnificent noble forms of the body. Three figures of angels accompany the composition.

The canvas was created in the style of “late Titian”: paints are more liquid, the layers are superimposed by sharp, mixed, wide strokes, the figures and the background are merged into a single whole, and the emotional life is shown very expressively.