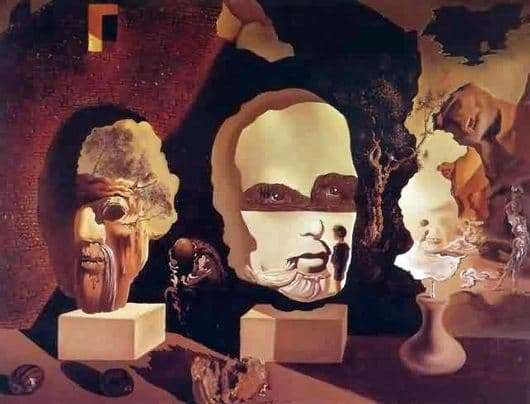 The famous painting by Salvador Dali is, in essence, a symbolic depiction of the three age lines of a person, in this case a child, a middle-aged man and a very old one. The features of Port Ljigat can be seen through these images, and through the arch you can see the ruins of Ampurias. Since Dali is considered to be the unsurpassed master of allegorical images and mysterious phantasmagorias, not every viewer can understand their meaning.

To see in the central figure the symbolic image of a young man who is on the pedestal of his potential growth and self-realization. In his eyes he has a desire to know this wonderful world and at the same time some uncertainty, even a little fear. Moreover, they are directed upwards, possibly towards the Most High, possibly towards the Universal Mind. After all, it is at this age that the person is the strongest, already having an idea about life and its meaning, about its purpose in the world.

To his right a slightly blurred image of childhood, with no clear outlines. It can be considered as a symbol of an unformed personality, without eyes (it has no idea about the realities of life). But it is written on a light background, most likely symbolizing a bright future, bright children’s dreams.

And the most gloomy of these images is the old man’s age: there is a mind in it, there is an experience, but there is no vital force that is inherent in the average figure. His eyes no longer really see the world (empty on the canvas). Next to him is an image of regret, remorse, located by the artist between the figures of an old man and a young man. Backgrounds for figures can also be viewed as symbols: a bright future, a harsh reality and shadows of colorful memories. Given this image, each viewer is given the opportunity to see himself.