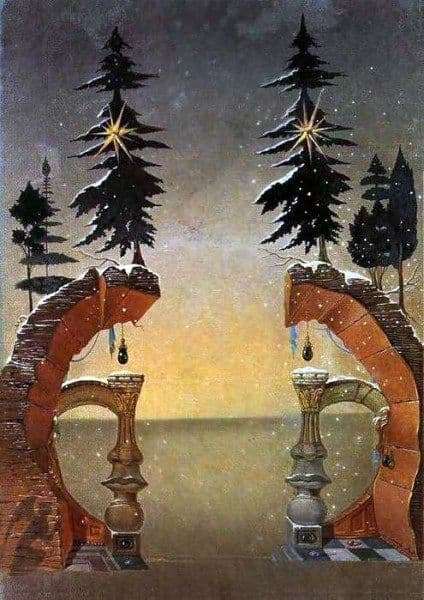 The painting by S. Dali “Christmas” was made in a manner of surrealism, which is a favorite for the artist. As is known, Dali sought in his work to rethink the Christian themes of the Nativity, the earthly journey of Jesus Christ, crucifixion and resurrection. His painting “Christmas” is also devoted to the religious theme of the birth of the Savior. At the same time, this particular picture adorned in 1946 the cover of a fashionable ladies’ magazine.

However, a bystander who is not familiar with the name of the canvas may not even understand what is depicted on it: he will see an arch broken in the middle, inside the arch a winter landscape growing on the bricks of a decaying architectural structure with Spruce stars in the middle of each of them.

The semicircular sides of the arch resemble the right and left parts of the face. Christmas-tree decorations hanging on either side of the arch are the eyes of some living creature, perhaps of God himself. Other decorations of the architectural structure resemble lips, nose and chin. The theme of the semicircle and the straight line resembles the image of the feminine and masculine principles, as well as the element of their combination in the birth of a new living being.

Thus, we are confronted with images deeply symbolic, Daly uses both famous Christmas symbols (the image of the Bethlehem star, the Christmas tree as a symbol of the resurrection of eternal life, the image of winter, because Christmas comes in winter) and those created by him (this includes the image of a human face in semicircle arches). It is also interesting that many symbols repeat them twice: for example, two trees, two Bethlehem stars.

This feature can be interpreted in different ways. For example, we can assume that under two trees and two stars gave imply the divine and human nature of Jesus Christ or the greatness of God and man on earth.