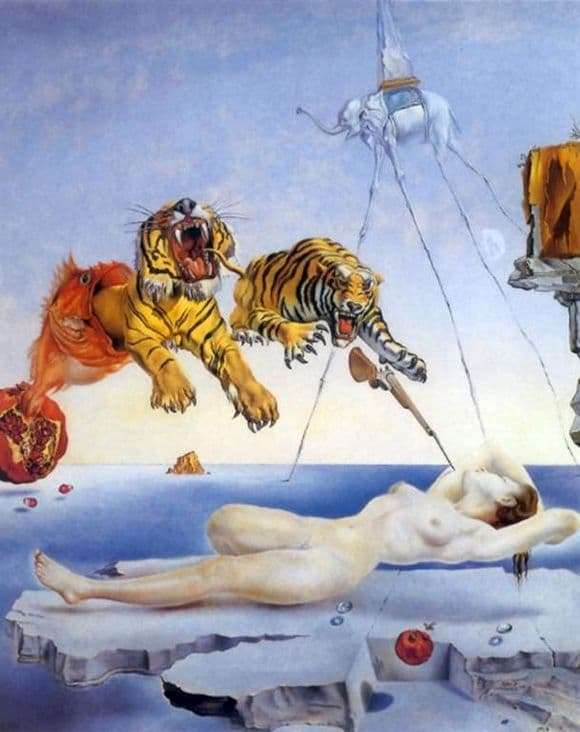 The famous masterpiece of the outrageous surrealist Dali, created in 1944 and inspired by Freudian psychoanalysis can be briefly called “Dream.”

Thus, Freud’s large-scale work on the theory of dreams turned out to be useful not only in the field of scientific psychology and psychiatry, but also served as the brightest inspiration for surrealism.

I must say, the psychoanalyst himself did not recognize this work, but one cannot deny the uniqueness of these paintings and the presence of many admirers of this art.

Dreams can last a second, while creating the impression of a holistic performance in the arena of the unconscious. Freudianism insists on the possibility of external stimuli to “penetrate” into a dream, while transforming into various symbolic images. So, on the canvas of Salvador Dali, the nude model (Gal’s wife) and a small grenade with a bee hovering above him are in focus.

These are objects of the real world.

The sleep of the rest of the composition drawings. The immense sea personifies the unconscious of man full of deep mysteries. Bernini’s phantom elephant on “stilts” conveys the instability and instability of the sleepy state. Fruit with scarlet berries in a dream becomes larger.

Paradoxically, an orange huge fish emerges from it, a pair of ferocious clawed tigers emerge from its mouth. The gun serves as a prototype of the sting of an insect buzzed in a state of drowsiness.

A woman’s body hovers over a rocky plane, which conveys to the audience the possibility of the impossible, which is familiar in dreams. A little bit more, and Gala will wake up… Before us is a blurred moment before her withdrawing into the conscious world from the depths of the unconscious.

Now on the canvas have the opportunity to personally admire the residents and tourists of Madrid. The rest of art lovers know the work from the pages of the worldwide network and from reproductions.