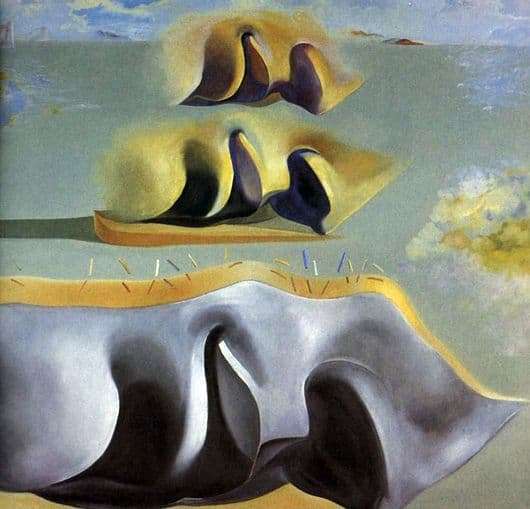 This canvas, mysterious and full of hidden meaning, was painted by the master of surrealism, Salvador Dali, in 1982. This is his last creation, dedicated to the unforgettable wife and muse. Gala was his love throughout his life, she gave him inspiration, joy and pain.

Looking at the picture for the first time, you can not say exactly what is depicted on it. You will see three vague silhouettes of silvery and golden colors, slightly reminiscent of desert burkhans or bizarre folds of cloth. If you defocus your vision and tilt your head to the right, you can distinguish the part of the female profile that is located three times in the figure in a horizontal position. There is no doubt that this image of the famous temptress Gala.

Is this the whole mystery of Dali left to descendants of the unsolved? This is possible. But there are a number of versions to find the meaning of this canvas. The first version assumes that the picture should be viewed from the bottom up. Proceeding from this, the meaning of the canvas lies in the fact that the author, as it were, removes the female image from us. It is believed that the artist with this technique anticipates the departure of his beloved from life, believing that her soul will go to heaven.

The second version offers to look at the canvas from top to bottom. So Dali denotes its stages of life with the muse. The top image of the female face is the smallest and indistinct, this is the time of their first years, when he paid attention mainly to her appearance and cheerful, open character. The second person is on a flat surface, a kind of pedestal. This shows the boundless love and devotion of the artist, who deified the spouse and put her a step above himself. The third image is different in color; it is also as if cut by a golden line. This way the awareness by the spouse of the inner world of the wife, of all her desires, charms and sins is shown. Such a gala is real, without embellishment and falsehood.

Whatever the hidden meaning of the picture, only Dali himself could accurately reveal it, because he painted a picture of a woman who was for him an ideal and meaning of life.