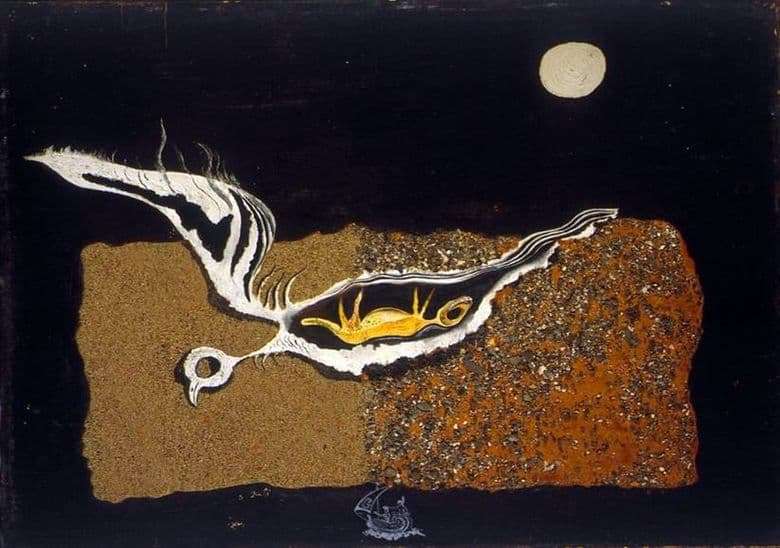 The picture is an amazing combination of different textures and shapes. It harmoniously intertwines materials such as wood, oil, stone mix and sand. Thanks to such an experiment, this work of Salvador Dali becomes embossed and very unusual. Interestingly, the picture is not fully lined with sand. It is necessary to attract special attention to the central part of the picture, which depicts a bird. The choice of colors gives a particular showiness to the work. The whole picture is built on a combination of black, white, light brown and their possible options. Contrast is created, thanks to which the image of a bird becomes especially catchy.

The work itself was done in the technique of Dada, the predecessor of surrealism. This direction is characterized by the image of objects as they see them in their minds. At the same time, the picture does not have to have any strict interpretation. For Dadaists, creating art for the sake of art is enough.

A painting by Salvador Dali shows us a bird. Empty eye sockets, absence of paws, a battered single wing and a translucent body evoke the impression of the perishability of this creature. It seems that the bird has died long ago and now its skeleton seeks to complete its flight in the bowels of the earth. No wonder the image of the bird is not located in the center of the picture, but slightly lower.

Inside the bird carries a lizard, judging by the absence of eyes and posture with legs up, also inanimate. The shape of the head and beak of the bird suggests that it is most likely not a predator. There is a feeling that the bird did not swallow this lizard, but carried it out like a chick or a lizard climbed inside the body of the bird and ended its life there.

The picture brings sad thoughts. It makes you think about the transience of life and the inevitability and ugliness of death.