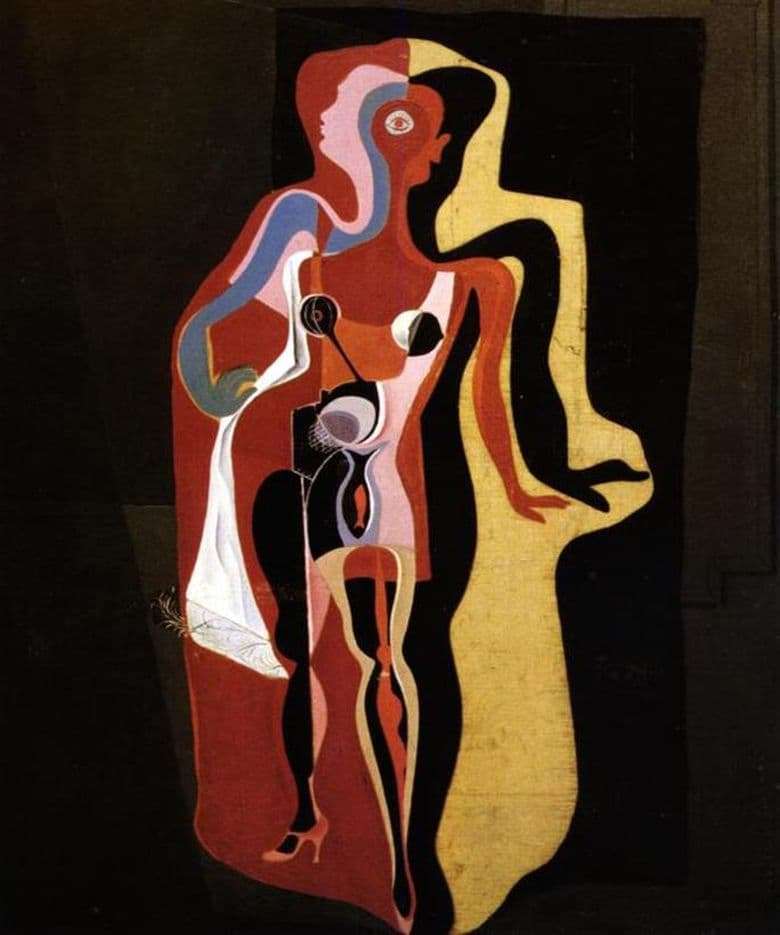 The painting “Barcelona mannequin” refers to the early work of Salvador Dali. It is written in the spirit of surrealism and has all the symbols inherent in it and the artist’s works. The picture is a silhouette of a woman. This is a mannequin, as evidenced by a spectacular pose. One hand is placed on the thigh, and the second falls, revealing the beauty of the shoulder and femininity of forms.

The portrait of a woman is not uniform and consists of three silhouettes.

The image on the left is made in white and blue, which symbolizes inaccessibility. Strengthens the effect of the silhouette of the dress, covering the hand of a woman and her knee. Proudly raised head and characteristic lips, substituted by the spotlight, indicate that at the moment the mannequin plays the role of a magnificent lady. Such a mannequin appears on the podium.

The image in the center appears with a different character. Contrasting to the first silhouette, the colors depict a slim figure in a red dress with a deep neckline, open arms and a short skirt. A line of stockings extending from the dress to the shoe itself adds some piquancy. The central image has gender symbols characteristic of the work of Salvador Dali. Pears, instead of breasts, personify voluptuousness, fish, sexuality, and an egg in the belly area refer to the biblical motif of the rebirth of life. This is how women are seen around in everyday life.

The third silhouette, located on the right, is a shadow cast by a fashion model. If light is purposefully falling on the first figure, then this image, on the contrary, is hidden from prying eyes. In addition to the black contour and eloquent posture, this silhouette has no outlines of clothing or hairstyle. Under the mask of an aristocratic lady or a fatal seductress hiding the true “I”, which the heroine of the picture does not show anyone.