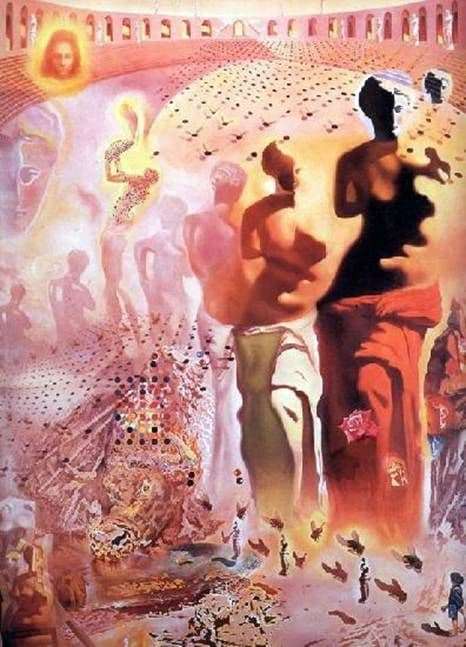 Practically, as well as all works of the genius surrealist, the painting “Hallucinogenic bullfighter” is also a canvas-riddle. After this work of painting saw the light, the artist himself admitted that in this picture – all Dali, because it contains almost a complete collection of images of the great master.

It is very difficult to tell about the plot of the paintings of Salvador Dali – it is necessary to see, as this is a magic, continuous transformation of forms, symbols, colors. Characters are bizarrely changing roles, and it is difficult to determine who will be who in the next moment.

This is followed with admiration by a six-year-old boy – little Dali, looking at the many and such different images of Venus de Milo, which, oddly enough, are composed of the appearance in the picture of the main character – the bullfighter. It is difficult to distinguish it at once, but after looking closely, you can see that the second Venus, located on the right, forms the torrero face. His eye is represented in the form of the head of a woman, and the nose is the chest of Milos. The shadow on her stomach is nothing but the mouth of the hero of a bullfight.

Completely in the spirit of the Spanish creator, the drawing of the details of the bullfighter’s clothing. His shirt is a robe of beautiful sculpture, and the green shadow just below the mouth of the torrrero acts as a tie. And finally, in the left part of the image, the bullfighter’s jacket is guessed against the background of the kind of rocks where the head of the fallen bull rests.

Such is the original geography of the picture, but in addition to the “actors” mentioned, other details are highlighted on the canvas, so to speak, secondary, but even more emphasizing the multifaceted world of images inhabiting the paintings of Salvador Dali. The top of this picture, written, by the way, in 1968-70, is decorated with the head of the artist’s wife and his “eternal muse” – Gala, without which she would be clearly incomplete.