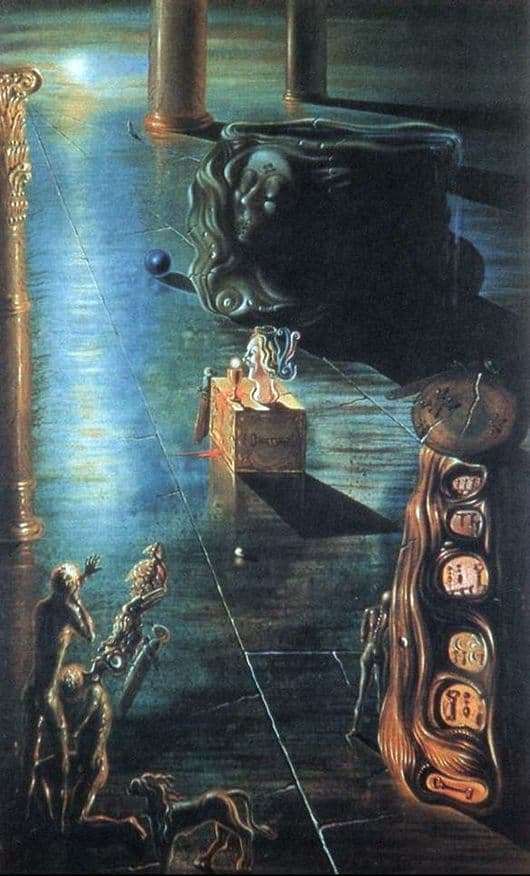 Salvador Dali – one of the most famous representatives of the surrealistic trend in the visual arts. His canvases are subject to the understanding of not every viewer; they require some preparation for perception.

Dali’s paintings are imbued with the symbolism of individual features that accompany almost every one of his creations. The painting “Fountain” was painted by Dali in 1930.

The picture leaves ambiguous impressions after viewing it. The first thing that attracts attention is a huge object in the center of the canvas, which is the fountain. On one side of it is visible the image of a woman’s face. The face has bulging whites of the eyes, no pupils. Also this mouthpiece is sewn up. This image at the same time scares and attracts, the viewer wants to understand what the author wanted to convey with this image. First of all, this image personifies panic and hopelessness.

Similar emotions express the figures of people in the foreground. The expression of their bodies personifies horror, confusion. In contrast to their emotions, many different keys are depicted in the right corner of the canvas. They are a symbol of the ways out and the resolution of their problems. But people are not interested in having a way out of this situation, they do not pay any attention to the keys.

The background of the picture casts a sense of panic on the viewer. The space in which the figures are located has no clear boundaries, it is infinite. Dali depicted the surrounding interior in cosmic gloomy colors. This color scheme creates the prerequisites for melancholic contemplation and understanding of the idea of the picture.

The apotheosis of the situation depicted in the picture is the figure of the dog not in the foreground. She stands motionless beside two human figures. A dog doesn’t care what happens – it doesn’t feel either horror or panic, it doesn’t care about everything that happens around.