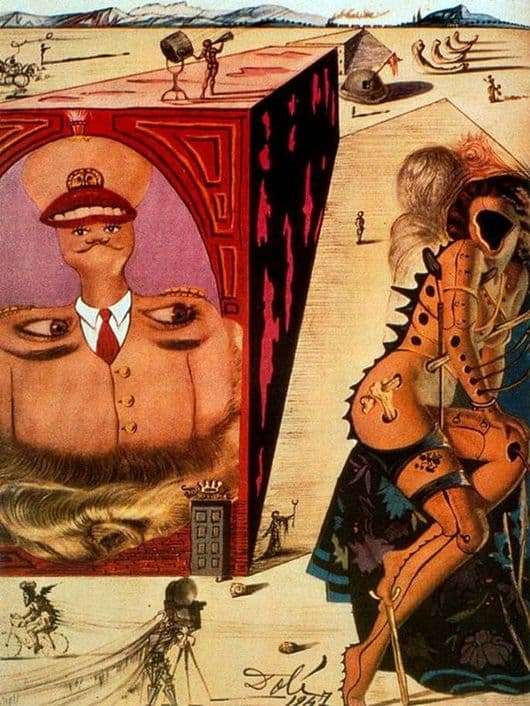 Salvador Dali – the famous Spanish artist of the last century, famous for his unusual attitude to art and painting, he traveled a lot in his long life. For 8 years, he lived far from his beloved Spain, forced to hide from the fascist regime of General Franco in America.

Being in the United States, Dali not only does not lose his desire to create something not quite ordinary and extravagant, but also takes on the matter with great enthusiasm, which causes considerable admiration from American society. Soon the scandalous name of Dali became well known to many celebrities, especially those who lived near Hollywood, where the artist, without much success, tried to use his talent in writing panoramas and paintings for films.

Very good works were created during the American period of his life, among which the 1947 “Hollywood” canvas can be noted. There are quite a few characters on this canvas, but the main ones are the image of a military man in uniform and the figure of a half-naked girl with a hole instead of a face.

The military figure is enclosed in an oval, which in turn is part of an elongated rectangle. At the top and bottom of the picture some strange figures are depicted, more resembling aliens, however, some of them are very earthly, so in the lower left corner you can see a strange figure on a two-wheeled bicycle.

A feature of “Hollywood” is that if you turn the picture, you can see the girl’s face instead of the military figure. Most likely, with the help of this focus, the artist tried to comprehend the true essence of Hollywood, changeable and impermanent, one that so long ridiculed and did not understand the great aspirations of the most talented artist of the XX century. A year after writing the picture, Dali returned to his homeland and began to live a normal life, because “Hollywood” can be considered the last gift of a genius who sheltered his country.