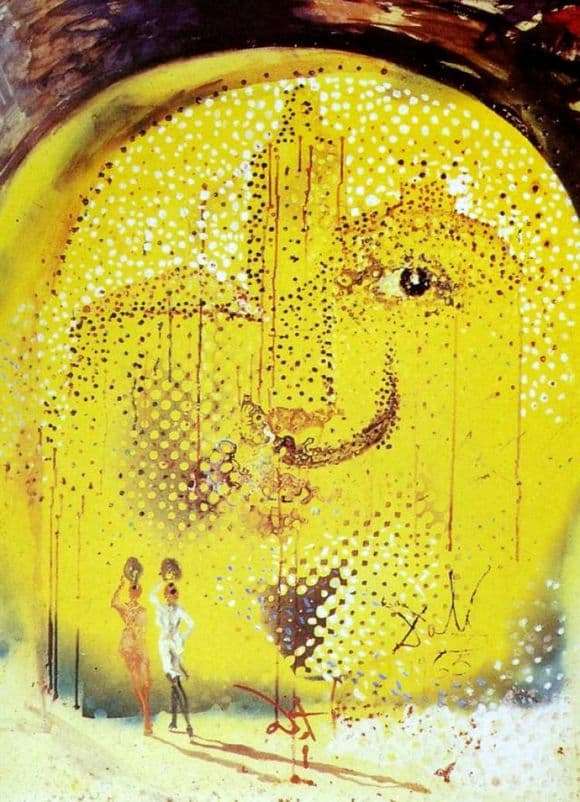 Salvador Dali is a famous surrealist painter, who everyone remembers by his fusible, soft clocks flowing down from the branches. His name is mentioned when extravagant eccentrics begin to be remembered, or when the topic of how modern art is incomprehensible to man is emerging, and in his years he was a real cultural phenomenon, a universal favorite, a genius who repeatedly wiped his feet on his public worship.

Speaking about his paintings, he never called them art, putting himself more in line with the stars of popular culture than with artists of the old times.

On his talent, he made money, shocked the bored light, not recognizing any frames, used the expressiveness of his own brush to turn himself inside out, exercising the merriest trick of the possible – this is a man, so he shows a trembling, living gut, but he is still breathing, still moving.

His “Sun” is a picture quite typical for him, not at first glance. Looking at it first is the same as looking at the daubing of any drop-in artist, because at first glance it is obvious that it is huge, golden, full and just like a yellow disk.

However, if you retreat a few steps, the details become intelligible – both the face looming in the sun, the evil one winking with one eye, and its slight ribbing, and the distant resemblance to a coin set on the edge. The image of the sun is devoid of the usual halo of divinity and idolatry. It is shown almost familiarly, as if the artist was closely acquainted with him.

And two vague, vague female figures, chiseled, dressed with a hint of high fashion, go to him and cast elongated red shadows.

At the level of associations, their departure is similar to the departure to worldly life under the rule of the golden calf – after all, it’s not for nothing that the sun is so unequivocally associated with the coin.