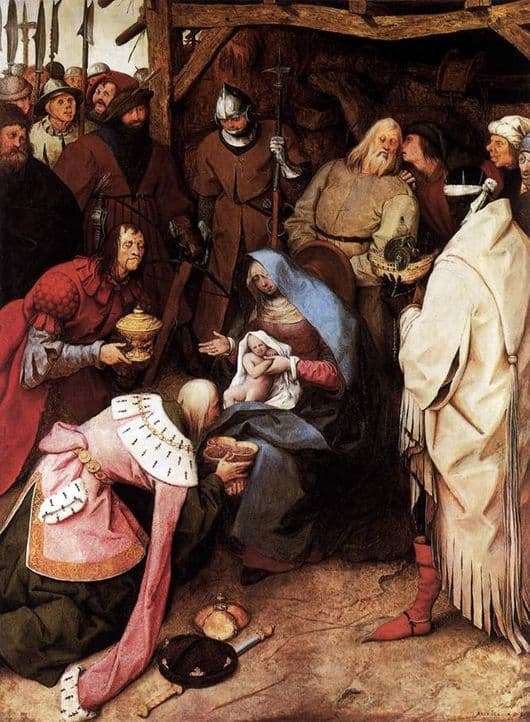 Peter Bruegel uses a fairly common plot of Catholic iconography. The semantic center is the Holy Family, around it is a jumble of images. The picture is solved in warm colors, so the figure of the Madonna contrasts with the environment and serves as a compositional center.

The Virgin Mary holds a baby in her lap, part of her figure is covered with a blue raincoat. Magi are the symbol of the three continents, so well known to medieval man. Two of them stretch their gifts to the Infant Christ and his mother. The faces of the Magi, more like grimaces, expressing despair, and their bodies involuntarily stopped in a solemn bow.

Balthazar is on the left hand of Madonna. He is extremely calm, and his face stands out sharply against the background of light-colored clothes. Joseph is located behind his beloved, while looking aloof. He does not care what is happening, so he unwittingly listens to a passerby. While the magicians presented their gifts, people crowded around the barn. There are many citizens here, but there are cruel soldiers with weapons at the ready.

Perhaps Bruegel refers to biblical motifs that were extremely popular among the inhabitants of the Middle Ages. In fact, to understand the author is not easy, his picture is an allegory. The birth of a child does not cause joy in people, if war reigns in the world. Thus, the artist most likely refers to the current situation in the country, rather than to the holy scripture.

Bruegel painted in 1564. The Netherlands, at that time, was engulfed in flames, and the country’s population was at war with Spain. It is not surprising that believers could not accept the painting The Adoration of the Magi. The cartoony characters and the indifferent image of Joseph had an inappropriate effect on commoners, with a seemingly traditional plot.