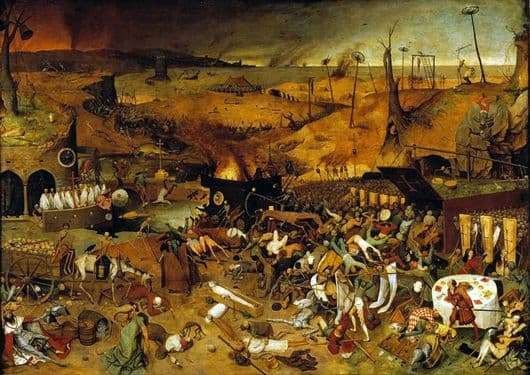 Peter Bruegel’s painting “The Triumph of Death” is unusually grim. It depicts the triumph of death that reigns in everything. One feels the truly global end of all mankind, although here, unlike the artist’s earlier paintings, there is no devilry.

The painter did not invent this plot. Even in the Middle Ages, similar motifs existed in icons. In such pictures, death begins to rule the world with an eternal scythe.

Bruegel combined those motives that existed before him, and created something of his own. In his interpretation, death mows down everyone. The painter also introduced an element of bullying people (death seems outwardly merciful). Bruegel creates a panorama, watching everything happening from a height.

Some are trying to resist. So a tall man tries to resist Death, but in vain. We see a couple of lovers who are engaged in music and are completely unaware of what will happen in the next moment.

In the process of scrutinizing the details, it is striking that hundreds of skulls and skeletons are scattered everywhere. The artist manages to depict seemingly monotonous skulls in such incredible positions that they acquire certain facial expressions.

The earth is completely empty and barren. Instead of vegetation there are gallows and wheels for execution.

The painting shows the judgment of the dead. We see skeletons on a dais, dressed in a kind of white tog. They are like a tribunal. Contemporaries Bruegel learned in such a scene a clear allusion to the Holy Inquisition and its tribunal.

The work of Bruegel more than relevant, but its meaning is hidden under the absolutely traditional motifs of the plot.