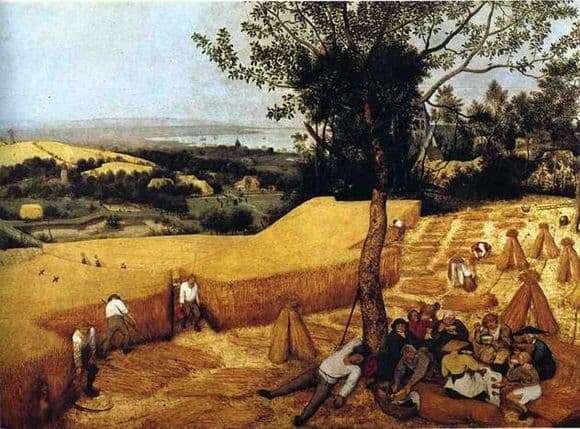 In the art of the Netherlands XVI. Peter Bruegel stands out as a significant figure. The cycle of oil paintings on wood “The Seasons”, dated by the author in 1565, shows the annual cycle of natural changes. Unfortunately, only 5 of the 6 paintings of the painter have been preserved. Other researchers believe that the paintings were 12. The works were written for the collector Nikolos Yonghelinka.

“Hunters in the snow” presumably depicts December – January. Several hunters with prey and dogs are heading for the city. To the left of them a fire was kindled, where a pig is inflamed. In the city, people are having fun on a frozen pond. The picture is calm and harmonious in scale and mood.

“Gloomy day” – a picture about the early spring (February – March). One farmer cuts off willow branches, another one ties them to a bundle. Another company is having fun and walking, eating waffles.

This fragment reminds carnival festivities. In the thaw, the water in the river rages, nailing the remains of ships to the shore. The mood of the picture is melancholic and restless.

“Haymaking” reflects the work of the peasants in June – July. Women and men are busy harvesting hay. The picture has a lot of yellow and orange shades, which creates a general joyful mood.

“Harvest” occurs in the late summer. On the canvas August – September. One team of reapers is working, others are busy snacking in the shade of a tree. Nearby a tired man is immersed in sleep.

“Return of the herd” refers to November. Shepherds are in a hurry to drive a herd from summer pastures. On the black sky it is clear that the storm is coming.

Bruegel described in detail in the Seasons the appearance of nature in different months. But the figures of peasants, with their traditional work for different seasons, are brought to the forefront in his works. The harmonious coexistence of nature and man is perfectly conveyed in the works of the artist.